Sarah Perry, chemical engineer, is studying a new approach to protein stabilization based on how cells work at body temperature. The research is aimed at boosting the accessibility of vaccines and other therapeutics, especially in developing countries, and extending the reach of temperature-stable proteins to sensing and catalysis applications.

The research is funded with a five-year, $657,920 grant from the National Science Foundation’s (NSF) Faculty Early Career Development (CAREER) Program. Perry’s Research Group is based at the Institute for Applied Life Sciences.

“This CAREER project will pioneer a new approach to protein stabilization using a biomaterial platform to mimic the crowded, protein-rich intracellular environment and enable the intelligent design of stabilizing formulations,” Perry says.

To do so, Perry is using polymers that self-assemble into liquid-liquid phase separated complex coacervate droplets and can be used to encapsulate proteins. The concentration of polymer in these droplets is similar to the level of crowding in cells. Perry’s hypothesis is that various factors including patterns of electrical charge can be used to tune the material properties, and thus the ability of these coacervates to stabilize proteins.

One difference between Perry’s approach and previous efforts to use polymers to encapsulate proteins is the concept of controlling the chemical interactions between the environment and the protein cargo. Perry is using sequence-controlled polymers to try and mimic the protein-rich environment of the cell to understand how patterns of chemistry affect both the ability to encapsulate proteins and stabilize them.

To test her hypotheses, Perry is working with a family of proteins called caspases that play a vital role in controlling apoptosis, or programmed cell death, as well as inflammation. This choice was inspired by the work of Jeanne Hardy, a professor of chemistry at UMass Amherst.

Ultimately, the long-term goal of Perry’s research is to identify design rules that can be used in future efforts to improve the temperature stability of proteins ranging from those used in vaccines and biologics to enzymes used in sensors or biocatalysis. 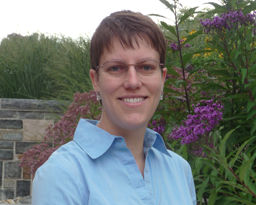