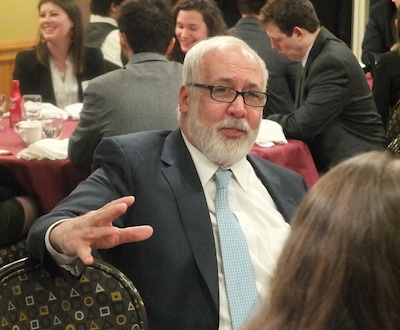 Dedicated to helping students develop professional skills for success, Alumnus Robert S. LaRussa '76 is a Washington D.C.-based international trade and national security counsel for Shearman & Sterling LLP, a global law firm with 20 offices on five continents. Prior to practicing at Shearman, Robert spent eight years in the Clinton Administration as an international trade official, including as Commerce Undersecretary for International Trade, one of the country’s highest-ranking international trade positions. He held two earlier positions in the Clinton Administration as Assistant Secretary of Commerce in charge of administering US trade laws, and as the Principal Deputy Assistant Secretary for a US Government global export promotion network. Prior to that, he was an international trade counsel in the US House of Representatives; he is an attorney and former journalist and a UMASS graduate of the History Department. Over the course of his career, he has negotiated numerous international trade agreements for the United States and for private parties. He has worked on the North American Free Trade Agreement (NAFTA) as a Commerce Department official, the Uruguay Round of international trade talks as a congressional attorney and negotiated trade and antidumping agreements with Russia, Ukraine, Mexico, China and Brazil, among others. He also represents companies in national security reviews conducted by the Committee on Foreign Investment in the United States.

Robert S. LaRussa '76 donates his time and expertise by teaching a seminar for the History Department, Navigating Washington, designed to give students a preliminary understanding of how history, politics, economics, and the legislative and administrative processes in Washington shape US public policy on international trade, and the impact this has on US international relations. In the process, students discover who influences these policies and a range of potential career paths in this area, as well as how to write for a Washington audience.