Almost twenty years after stepping into the role of Director of the UMass Amherst Public History Program, Professor Marla Miller will hand the leadership baton this summer to Professor Sam Redman and return to her regular role as a member of the faculty.

Miller became director of the Public History Program in 2002, when program founder Professor David Glassberg—who conceptualized the program and led it for its first fifteen years—became department chair.

During Miller’s tenure, the program has grown in numbers as well as reach. The Graduate Certificate in Public History became a credential open to all graduate students across campus, and the program took on numerous grants, contracts and partnerships that generated opportunities for students to gain hands-on experience. In addition, Miller focused energy on ways -- from the development of a Boston-based alumni group to gatherings at annual professional meetings -- to connect program alumni with current students.

Miller envisioned and steered the successful proposal to create the department’s position of Director of Outreach and Community Engagement; worked with our generous alumnus Charles K. Hyde to develop the activities of the Dr. Charles K. Hyde Public History Program Fund; and helped launch the department blog, Past@Present. 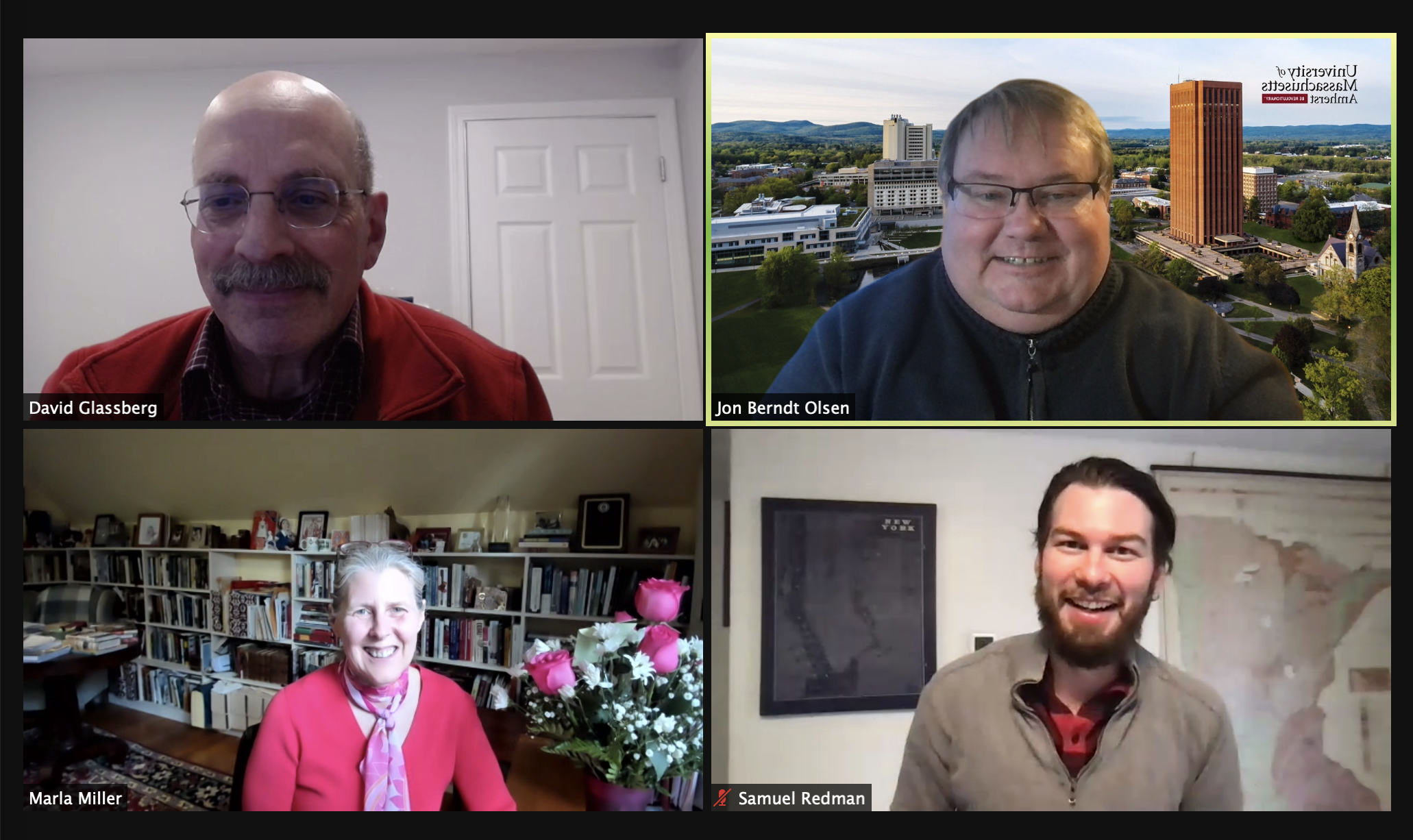 At the end of this spring semester, during the annual celebration of the graduate program, the history department recognized Professor Miller’s longtime service and leadership as Director of the Public History Program. She is pictured here with three of the four other faculty in the program, Professors David Glassberg, Jon Berndt Olsen, and Samuel Redman (clockwise from the top left).

“It’s been such a pleasure and a privilege to lead the Public History program over these past years,” said Miller. “The work has been rewarding, and sometimes downright exhilarating, every step of the way. I’m so grateful for the partnership and camaraderie of so many colleagues in making it all work, from our stellar staff (with special shout-outs to Mary Lashway and Jess Johnson), to our thoughtful and supportive department leadership, to the outstanding series of graduate assistants the program has relied on through the years, to the whole community of public history students who have made our work both fun and meaningful.”

Miller, who served as President of the National Council on Public History from Spring 2018 - Spring 2020, is author of four well-received books: The Needle's Eye: Women and Work in the Age of Revolution (University of Massachusetts Press, 2006) ; Rebecca Dickinson: Independence for a New England Woman (University of Massachusetts Press, 2009); Betsy Ross and the Making of America  (Holt, 2010); and Entangled Lives: Labor, Livelihood, and Landscapes of Change in Rural Massachusetts (Johns Hopkins University Press, 2019). She is co-editor of Bending the Future: Fifty Ideas for the Next Fifty Years of Historic Preservation in the United States (University of Massachusetts Press, 2016), and co-author of Imperiled Promise: The State of History in the National Park Service, a multi-year study funded by the NPS Chief Historian's office and hosted by the Organization of American Historians recognized by the NCPH with that year’s award for excellence in consulting. Miller is also founding editor of the prizewinning UMass Press series Public History in Historical Perspective and has served on the editorial board of numerous leading academic journals. In June 2021, she was named Distinguished Professor at the University of Massachusetts Amherst, an honor afforded to only a handful of faculty each year.

The program is thrilled to announce that Professor Sam Redman will take the reins in summer 2021 and lead the program into the future. Redman, a veteran public and oral historian, is the author of  Bone Rooms: From Scientific Racism to Human Prehistory in Museums (Harvard University Press, 2016) and the forthcoming Prophets and Ghosts: The Story of Salvage Anthropology (Harvard University Press, 2021). Redman researches U.S. social, cultural, and intellectual history, focusing particularly on the history of museums, with regards to racism and ethics in anthropological collections. Upon his arrival in 2013, he launched the UMass Oral History Lab and has since offered numerous trainings to a wide range of organizations across Massachusetts and beyond, including particularly innovative work at the intersection of oral history, public history, and the visual arts.

“I’m honored to be a part of this program and deeply humbled to step into the important role of directing the UMass Public History Program, a role so capably established by David Glassberg and impressively carried forward by Marla Miller,” said Redman. “I look forward to carrying on their important work and working to expand the program into new directions as we move forward into the future.”