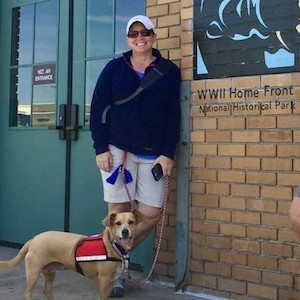 Kim’s research focuses on the social and cultural aspects of United States history between 1920 and 1975. Using an intersectional approach her research investigates the discourses of gender, race, class, sexual orientation, and ability that circumscribe women’s and other marginalized community’s participation in the U.S. military. Using oral history as a research methods, she interrogates the social construct of citizen soldiers and challenges dominant historical narratives of combat veterans. By documenting the lived experiences of women, people of color, and the LGBT community she seeks to emphasize the resiliency and resolve of American’s marginalized warriors and to disrupt hegemonic understandings of citizenship, soldier, and veteran. By centering on the experiences of marginalized veterans her implicit intent is to make the invisible—visible, and to eliminate historical silences.
Kim’s other interests include: Empire; the state’s role in reifying citizenship through social constructs such as gender, race, class, sexual orientation, age and ability; labor history; civil rights; regimes of truth; and, legal history (i.e. laws that disenfranchise women, minorities, the poor and those deemed likely to become a public charge, as well as, those that seek corporal control over women’s bodies).