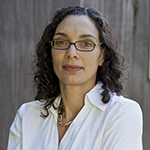 The Department of History could not be more pleased to share that our esteemed colleague, Professor Barbara Krauthamer, has been appointed Dean of Graduate School. In the words of Provost Katherine Newman:

"As many of you know, Professor Barbara Krauthamer is an eminent historian of slavery and emancipation in the 19th century American South, a devoted mentor to graduate students in her department, and an innovative leader. A member of our History Department faculty since 2008, Barbara was named associate dean for student inclusion and engagement in the Graduate School in 2015. In that role, she created multiple fellowship programs designed to support the recruitment and retention of traditionally underrepresented graduate students. In addition to the REAL fellows program, she initiated the Summer Dissertation Fellows program and the STEM Faculty-Student Research Fellowship. These fellowship programs facilitate multiple mentoring pathways for graduate students to ensure that they have access to both financial resources and mentoring and support networks. Barbara has also worked closely with the Graduate School’s Office of Professional Development to promote diversity issues and ensure that professional development programs reach broad audiences across campus.

Barbara is widely recognized as a leading historian of African American slavery and emancipation in the United States. Her published work includes Black Slaves, Indian Masters: Slavery, Emancipation, and Citizenship in the Native American South. She is the co-author of Envisioning Emancipation: Black Americans and the End of Slavery, which received a number of honors, most notably the 2013 NAACP Image Award for Outstanding Literary Work in Non-fiction. Most recently, she co-edited the textbook, Major Problems in African American History, one of the leading textbooks in the field. She has authored numerous articles, curated exhibits and written pieces for general audiences. She appears in the award-winning documentary film, Through A Lens Darkly: Black Photographers and the Emergence of a People. Her research and books have been profiled in many media outlets, including the New York Times, CBS Evening News, National Public Radio, Pa cifica R adio and CNN as well as in media outlets in the U.K., France and Italy.

Barbara has received awards and funding from the National Endowment for the Humanities; Stanford University’s Research Institute for the Comparative Study of Race and Ethnicity, Yale University’s Gilder Lehrman Center for the Study of Slavery, Resistance, and Abolition, the Institute for Historical Studies at the University of Texas at Austin, and the Schomburg Center for Research in Black Culture. She also sits on the boards of the Berkshire Museum and the Samuel Harrison Society, both in Pittsfield.

She received her B.A. from Dartmouth College, a master’s degree from Washington University in St. Louis, and her Ph.D. from Princeton University."