Professor Kevin A. Young’s new book, Levers of Power, explores how corporations exert influence over the US government. Co-written with Tarun Banerjee and Michael Schwartz, it argues that corporate sway over politics is more than just a result of campaign donations and lobbying. Regardless of which candidate or party is elected into office, corporations have tremendous power to influence politics by virtue of their control over the economy. The routine practice of the “capital strike” – when they refuse to invest capital in the economy – helps to shape policies and laws. Meanwhile, institutions such as the military, anti-immigration agencies, and local and state police forces use their influence over enforcement to determine what policies are possible and how they are implemented.

Contrary to the common assumption that social movements are most effective when they focus on elections and politicians, the book argues that inflicting direct costs on corporations and state institutions is a more effective way for the 99% to influence government policy. This argument draws upon historical case studies from the labor activism of the 1930s, the Black upsurge of the 1960s, and the movement against the US war in Vietnam. In this moment of intense crises and popular outrage, Levers of Power will be a vital resource for understanding how the US government really works and how social movements can change it.

Levers of Power is available for purchase on the Verso Books website. 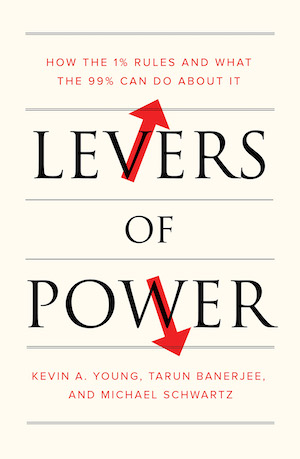