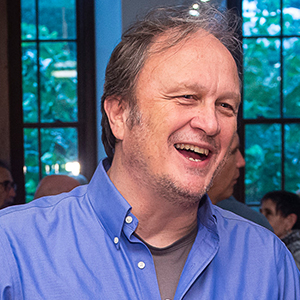 We in the UMass History department join the whole campus community in mourning the loss of Rob Cox, head of Special Collections and University Archives and Adjunct Professor in the Department of History. Rob’s warmth, generosity, and insight as a colleague, mentor, and educator will be deeply missed and long remembered in Herter Hall.

Rob joined the UMass community fifteen years ago.  His wide-ranging scholarly curiosity and talents (a true polymath, Rob earned degrees in history, poetry, archives, paleontology, and geology, and was a specialist in the history of religion, the early republic, and food) together with his general enthusiasm and genial good humor, meant that he connected with many members of the faculty and graduate student community on many levels.

A gifted and dedicated educator, Rob taught courses in the history of religion (his thoughtful book Body and Soul: A Sympathetic History of American Spiritualism captured his generous intellectual demeanor); in the history of science and medicine; and in the work of archives and archivists--memorable courses that fostered the spirit of lively intellectual engagement that represented the best of what a graduate seminar should be.  His interest in the history of food (reflected in his several books on New England food history, particularly the past and present of pies, chowder, and cranberries), led not only to a course in Culinary History but also numerous public programs. A talented public historian and charismatic public speaker, Rob crossed the Commonwealth to bring a wide range of audiences into conversation around the region’s past.  He was also a good citizen of our department, contributing to the work of the Graduate Studies, admissions, and search committees.

But it was as a mentor that his dedication to the rising generation of historians really shined forth. Rob sat on numerous thesis committees for undergraduate and graduate students alike.  Rob also supervised countless student internships in Special Collections and Archives, helping them find their first footing in the professional world they hoped to enter. He also taught many of these same students through the Archival Management program at Simmons College.

Jaimie Kicklighter (MA ‘13), who worked with Rob while completing her Graduate Certificate in Public History, recalled that he “was so giving of his time to help me learn while I was an intern, a graduate student worker, and later an emerging archivist. I am forever enriched by the wisdom he shared and grateful to have known such a supportive mentor.” Samuel Dodge (MA ‘13) remembered how Rob, who served as his thesis advisor, “was always happy to see me and the interest he expressed in my own research always seemed genuine. He gently guided me through errors, prodded me to expand my thinking, and introduced me to the works of other great scholars. As a young historian, taking my first tenuous steps into the field, Rob Cox was an excellent guide. I owe him a great debt.”

As an archivist, Rob was committed to social justice, and developed an internationally significant collection of materials related to the history of individuals and organizations committed to social change.  They are among the many sets of critically important resources Rob brought to our campus that will shape historical study for generations to come.   An important initiative around the region’s music led to a productive collaboration with Folk New England, the preservation of the full history of Rounder Records, as well as papers and photographs of artists and photographers who documented the music scene. Under his leadership, UMass collected large bodies of records from key organizations like Americans for the Arts, the New England Yearly Meeting of Friends, Science for the People, and many others.

Rob was committed not only to the preservation of these unique scholarly resources, but also to their digitization so that they would be widely used.  He was a key participant in the creation of the Digital Commonwealth and other collaborative projects that brought materials from various repositories into a common database.  And perhaps most significantly, he initiated and oversaw the digitatizion of the W.E.B. Du Bois Papers, which has led to an explosion of new scholarship world wide on Du Bois and his legacy.

Rob also told great stories, whether about his collecting trips, his farm animals, or his adventures in paleontology and other pursuits prior to UMass.  His passing is an enormous loss for many communities, personal and professional, in Amherst, the region, and beyond. We share our deepest sympathies and condolences with his wife Danielle and their family’s loved ones.

For more on Rob's life and his vital contributions to our campus community, please click here. Those who wish to contribute to a fund in Rob's memory to continue his work at Special Collections and University Archives, the Robert S. Cox Special Collections Fund has been established in his honor. An on-campus celebration of his life is expected to occur at a later date.