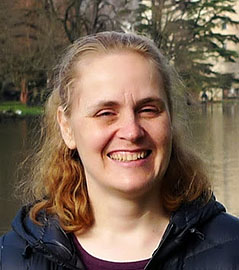 Her work focuses especially on the French Revolution and its aftermath. Her first book was Family and The Nation: Gender and Citizenship in Revolutionary France, 1789-1830. She has published numerous articles in both English and French-language journals and edited collections. Many explore the ways that revolution, war, and peacemaking relate to gender and family life. Others touch on diverse subjects including French Caribbean prisoners of war in Britain; clothing as a symbol for competing visions of national identity; the use of familial metaphors for portraying the power of the state; and a ban on interracial marriages in early nineteenth-century France. She has also written synthetic essays on topics including the long-term legacies of the French Revolution; rethinking early nineteenth-century Europe as a post-war society; human rights and revolution; and the history of gender and nationalism in Europe.

Along with Mette Harder, she is the editor of Life in Revolutionary France (Bloomsbury Press, forthcoming, 2020). She is currently completing a book, with the working title of The Soldier’s Reward: Love and War in the Age of Napoleon, and is also researching on the experiences and status of free people of color in France in the revolutionary era.

She has served on the editorial boards for the Journal of Women’s History and French Historical Studies, and is an Associate Editor for H-France Salon. She has been invited to give talks or participate in national and international forums in the United States, France, Great Britain, Italy, the Netherlands, New Zealand, Taiwan, and Japan.

“Ending War: Revisiting the Aftermath of the Napoleonic Wars.” Co-edited with Denise Davidson and Christine Haynes. Special issue of the Journal of Military History, 80 no. 1, 2016.

“Citizenship, the French Revolution, and the Limits of Martial Masculinity.” In Gender and Citizenship in Historical and Transnational Perspective, eds. Rachel Fuchs and Anne Epstein, 19-38. New York: Palgrave Macmillan, 2016.

The Family and The Nation: Gender and Citizenship in Revolutionary France, 1789-1830. Cornell University Press, 2005.