"Threats to Democracy and Dangers of War," A Conversation with Medea Benjamin, Amer Ahmed, Mojgan Haji, and Christian Appy 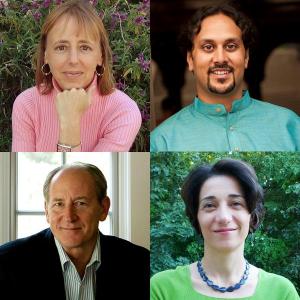 The United States is at war in Afghanistan, Iraq, and Syria, and U.S. leaders have threatened war in North Korea, Iran, and Venezuela. Fears of deportation, white supremacist violence, police violence, climate change-related disaster, and economic insecurity have heightened anxieties among vulnerable populations.

What “Threats to Democracy and Dangers of War” do we face today? How can history inform strategies for resisting war and attacks on democracy?

Join the UMass Amherst History Department and Historians for Peace and Democracy to discuss these questions in roundtable dialogue and small group break-out sessions with our panelists.

Following the event, numerous university student groups and local grassroots organizations will be present to share information about their work.

PANELISTS (clockwise from the top left)

Medea Benjamin, co-founder of the antiwar group Code Pink and the fair-trade organization Global Exchange. She has been a peace and justice activist since the 1970s and has authored nine books, including Kingdom of the Unjust: Behind the US-Saudi Connection (O/R Books, 2016). Read more.

Amer F. Ahmed, Ed. D., Director of Intercultural Teaching and Faculty Development at UMass Amherst and frequently requested keynote speaker, facilitator, and consultant on issues of social justice, diversity, and inclusion. He was born in Ohio to Indian Muslim immigrants, and draws on lived experience, theoretical analysis, and practical application to guide institutions, leadership, and workplaces on a path to transformative change. Read more.

Mojgan Haji was born in Iran and immigrated to the United States in 1983 at the age of 16 during the Iran-Iraq War. She is a Massachusetts-based pharmacist and political activist who has volunteered for the National Iranian-American Council and led groups of Iranian-Americans to meet with legislators to discuss the Iran Nuclear deal and Muslim ban.

Christian G. Appy (facilitator), Professor of History at UMass Amherst, member of the Historians for Peace and Democracy speakers’ bureau, and author of three books on the American War in Vietnam, including American Reckoning: The Vietnam War and Our National Identity (Viking, 2015). Read more.