The Land Beneath Our Feet: Panel Discussion with the Director 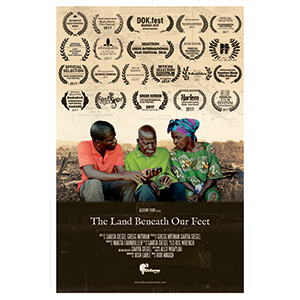 The Land Beneath Our Feet follows a young Liberian man, uprooted by war, who returns from the USA with never-before-seen footage of Liberia’s past. The uncovered footage is embraced as a national treasure. Depicting a 1926 corporate land grab, it is also an explosive reminder of eroding land rights. In post-conflict Liberia, individuals and communities are pitted against multinational corporations, the government, and each other in life-threatening disputes over land. What can this ghostly footage offer a nation, as it debates radical land reforms that could empower communities to shape a more diverse, stable and sustainable future?

Gregg Mitman is the Vilas Research and William Coleman Professor of History, Medical History, and Environmental Studies at the University of Wisconsin-Madison. He is an award-winning author, filmmaker, and teacher whose interests span the history of science, medicine, and the environment in the United States and the world.  A past president of the American Society for Environmental History, he is the recipient of fellowships from the Alexander Von Humboldt Foundation, the Carnegie Corporation of New York, and the John S. Guggenheim Memorial Foundation, among others. His books and co-edited volumes include Future Remains: A Cabinet of Curiosities for the Anthropocene(University of Chicago Press, 2018), Breathing Space: How Allergies Shape our Lives and Landscapes (Yale University Press, 2007), and Reel Nature: America’s Romance with Wildlife on Film, rev. ed. (University of Washington Press, 2009).  He co-produced and co-directed two films, In the Shadow of Ebola, an intimate portrait of the Ebola outbreak in Liberia, and The Land Beneath Our Feet, a documentary on history, memory, and land rights in Liberia. His most recent book, Empire of Rubber: Firestone’s Scramble for Land and Power in Liberia, will be published by The New Press.

Cajetan Iheka (panelist) is Associate Professor of English at Yale University, specializing in African literature, ecocriticism, ecomedia, and world literature. He is the author of Naturalizing Africa: Ecological Violence, Agency, and Postcolonial Resistance in African Literature (Cambridge University Press, 2018), winner of the 2019 Ecocriticism Book Award of the Association for the Study of Literature and Environment, and the 2020 First Book Prize of the African Literature Association. His next single-authored book, African Ecomedia: Network Forms, Planetary Politics, is forthcoming from Duke University Press later in 2021. The book positions Africa at the center of discourses on media ecologies, materiality, and infrastructure. Also forthcoming in summer 2021 is an edited volume in the MLA Options for Teaching Series, titled Teaching Postcolonial Environmental Literature and Media. Professor Iheka also coedited African Migration Narratives: Politics, Race, and Space (University of Rochester Press, 2018), and Environmental Transformations, a special issue of African Literature Today. His articles have appeared or are forthcoming in refereed venues such as Interdisciplinary Studies in Literature and Environment, Environmental Ethics, Research in African Literatures, The Cambridge Companion to the Environmental Humanities, and the Oxford Handbook of Nigerian Politics. He currently serves as deputy editor of African Studies Review, the multidisciplinary journal of the African Studies Association.

Elisa Prosperetti (panelist and moderator) is a Visiting Assistant Professor in the History Department at Mount Holyoke College. She studies the social and intellectual history of contemporary West Africa, with a focus on postcolonial development. Prosperetti received her PhD from Princeton University in 2020. She volunteers as a podcast host for the African Studies channel of the New Books Network.

Russell Stevenson (panelist) holds a PhD in African history from Michigan State University. His dissertation examines the geo-cultural porosity of indigenous educational institutions like the University of Nigeria, Nsukka and the significance of its cultural layeredness for the making of Nigerian independence. He has also published on "Mormonism" in Nigeria and won the 2015 Mormon History Association best book award for his work on comparative black "Mormonisms." A Fulbright-DDRA recipient, Russell Stevenson currently teaches African history at the University of Massachusetts-Amherst and functions as a consultant for public defenders providing counsel to African refugees.

Events will be live and recorded on the Feinberg Series website, with a livestream on Facebook and YouTube.Spanish interpretation and closed captioning will be available.

Organized by the UMass / Five College Graduate Program in History, the Department's Writer-in-Residence Program facilitates sustained conversation with widely-read authors whose historical work engages broad public audiences. Each year, with major funding from Five Colleges, Inc., the department brings a writer of national prominence to campus for a week-long residency in order to give focused attention in our graduate training to writing for a range of audiences and in a variety of venues well beyond the monograph or scholarly article.

The 2020-2021 Feinberg Series ~ Planet on a Precipice: Histories and Futures of the Environmental Emergency

The UMass Amherst history department's 2020-2021 Feinberg Series is exploring the climate and environmental emergency in historical perspective. Free online events address the historical origins of ecological destruction and mass extinction; the implications of these phenomena for human and nonhuman survival and ways of life; the role of human politics; the connections between the environmental emergency and histories of capitalism, colonialism, genocide, and white supremacy; human entanglements with the nonhuman world; and the past, present, and future of resistance movements. The series seeks to deepen our understandings of this singularly important set of problems through historical analysis and, in doing so, to envision constructive paths forward. The Feinberg Family Distinguished Lecture Series is made possible thanks to the generosity of UMass Amherst history department alumnus Kenneth R. Feinberg ’67 and associates. The series is co-sponsored by more than 3 dozen community and university partners. Visit the Feinberg Series webpage for more information about the series.