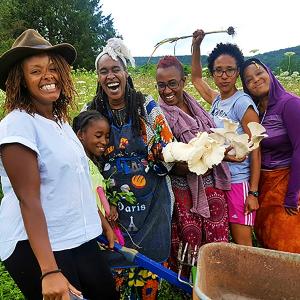 This panel will explore efforts to create intentional communities based on participants' visions of just and harmonious social relationships. Often described as “utopian,” these movements have focused on realizing revolutionary visions on a small scale in the “here and now,” and were envisioned by participants as an opportunity to live rightly even within a larger oppressive society. Recognizing the complicated social realities in which such movements have always been embedded, this event places practitioners and scholars in critical conversation about the movements' premises, challenges, contradictions, blind spots, impacts, and transformative potentials.

Presenters include Jasmine Burems, Wildseed Community Farm and Healing Village; Kate Daloz, Columbia University and author of We Are As Gods: Back to the Land in the 1970s on the Quest for a New America; Lior Libman, Binghamton University and a historian of the kibbutz; and Ousmane Power-Green, Clark University and the David Ruggles Center and author of Against Wind and Tide: The African American Struggle against the Colonization Movement.

Free and open to the public. Book signing to follow.

Jasmine Burems aka Jasmine Red Electric Genesis is a black womanist, healing justice practitioner, artist, liberation organizer, survivalist and mother committed to social, environmental, racial, and gender justice and creating a liberated black future. She is the cofounder of Wildseed, a black- and brown-led, feminine-centered, queer-loving, earth-based intentional community and land-based healing sanctuary focused on healing present and ancestral trauma, ecological guidance and reverence for Earth, radical imagination and courageous artistry and liberatory economics. She curates Afro futurist and Afroecology cultural arts programming, rites and rituals. Jasmine is a founding member of healing justice collective, Harriet's Apothecary, and also works collaboratively with organizations and institutions facilitating community healing spaces. She is the founder of the Institute of Afrofuturist Ecology. She cultivates a practical and ceremonial approach that honors her African American and Lenape native ancestry.

Kate Daloz grew up in Vermont's Northeast Kingdom, in the geodesic dome her parents built. She received her MFA from Columbia University, where she also taught undergraduate writing and where she is now the director of the graduate writing program. Her work has appeared in print and online in the New Yorker, Esquire, Rolling Stone and The American Scholar, among other publications. Her book, We Are As Gods: Back to the Land in the 1970s on the Quest for a New America, follows the dreams and ideals of a small group of back-to-the-landers to tell the story of a nationwide movement and moment. It is a poignant rediscovery of a seminal moment in American culture, whose influence far outlasted the communities that took to the hills and woods in the late '60s and '70s.

Lior Libman is an Assistant Professor of Israel Studies and an Associate Director of the Center for Israel Studies at Binghamton University, State University of New York where she teaches Modern Hebrew Literature and Culture. She received her PhD from the Hebrew University of Jerusalem in 2014. Before joining SUNY Binghamton in 2016, she was a Postdoctoral Fellow at University College London (2014-2016). In Spring 2017, she was a Fellow at the Frankel Institute for Advanced Judaic Studies at the University of Michigan – Ann Arbor. She specializes in Kibbutz and Socialist-Zionist Cultural and Intellectual History, and Modern Hebrew and Israeli Literatures. Her current book project examines the imagery and the political imagination of the kibbutz in the formative years of Israeli statehood.

Ousmane Power-Greene is an author, professor, and community educator based in Massachusetts. A specialist in African American social and political movements, Professor Power-Greene teaches at Clark University. He completed his B.A. from the University of North Carolina at Chapel Hill and an M.A. and Ph.D. from the University of Massachusetts-Amherst. Dr. Power-Greene’s first book, Against Wind and Tide: The African American Struggle against the Colonization Movement was published by NYU Press 2014. As a community-educator, Professor Power-Greene teaches for the Clemente Course in the Humanities program in Springfield and Worcester. This program is designed to provide adults from under-resourced communities tuition free college-level courses. Dr. Power-Greene also works with K-12 teachers on curriculum about slavery, abolition and African American history. He is the Program Committee at the David Ruggles Center in Florence, MA where he organizes a biannual Teacher Institute.

Sigrid Schmalzer (moderator) is Professor of History at the University of Massachusetts Amherst.

Location Information: The Student Union is located in the central part of campus, nearby the UMass Parking Garage (1 Campus Center Way, $1.75/hr). Free parking is available in many staff parking lots after 5:00 pm. More information: bus schedule, campus map with the Student Union and nearby parking indicated.

If you need directions or additional assistance to plan your visit, or to request specific accommodations, please contact the History Department's communications assistant, Adeline Broussan, at communications@umass.edu.

About the Feinberg Series

Visit the Feinberg Series webpage for more information about the series, including a full list of co-sponsors and community partners.