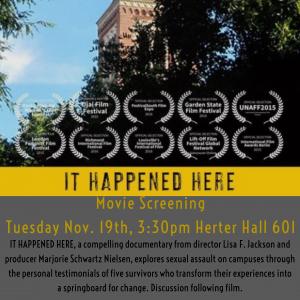 IT HAPPENED HERE, is a compelling 2014 documentary from director Lisa F. Jackson and producer Marjorie Schwartz Nielsen which explores sexual assault on campuses through the personal testimonials of five survivors who transform their experiences into a springboard for change.

In raw and intimate interviews, the students describe surviving sexual assault only to be met with apathy, disbelief, blame and retaliation from the authorities when they tried to report the crime. When they tried to get justice, they were ignored, belittled and shamed, while their attackers remained on campus with impunity. But instead of hiding away in shame, they chose to speak out, and found a way to force institutional change.

The screening will be followed by a discussion of Title IX with Laura Ciolkowski, Women, Gender, Sexuality Studies and author of the Rape Culture Syllabus, Jennifer L. Nye, Lecturer in Law & Social Justice, History, and Adeline Broussan, Instructor, History.

CONTENT WARNING: This film contains audio and visual material that some viewers may find disturbing, including but not limited to rape, sexual violence, physical violence, and institutional failures. Viewer discretion advised.