Film Screening: “Shusenjo: The Main Battleground of the Comfort Women” 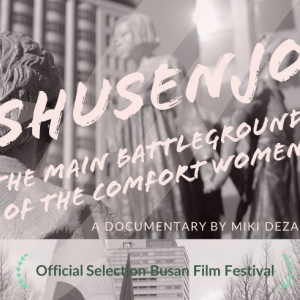 “The “comfort women” issue is perhaps Japan’s most contentious present-day diplomatic quandary.  Inside Japan, the issue is dividing the country across clear ideological lines. Supporters and detractors of “comfort women” are caught in a relentless battle over empirical evidence, the validity of oral testimony, the number of victims, the meaning of sexual slavery, and the definition of coercive recruitment. Credibility, legitimacy and influence serve as the rallying cry for all those involved in the battle. In addition, this largely domestic battleground has been shifted to the international arena, commanding the participation of various state and non-state actors and institutions from all over the world.  This film delves deep into the most contentious debates and uncovers the hidden intentions of the supporters and detractors of comfort women. Most importantly it finds answers to some of the biggest questions for Japanese and Koreans: Were comfort women prostitutes or sex slaves? Were they coercively recruited? And, does Japan have a legal responsibility to apologize to the former comfort women?”

This controversial project should be of interest for students and scholars of historical memory, public history, imperialism, and gender and sexuality as well as the broader histories of China, Korea, and Japan. Following the screening, Garrett Washington, Department of History will moderate a Question and Answer session with Mr. Dezaki. In order to most efficiently use our time, questions for the director will be accepted up until the end of the film at gwashington@umass.edu from anyone who will be in attendance. Please include your name and question so that Mr. Dezaki will be able to respond to you directly after the film.