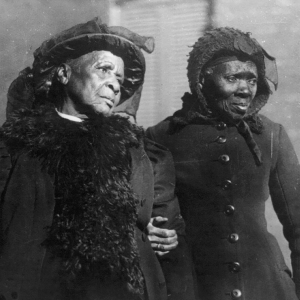 This is the capstone event of All Hamptons Read, a community-wide reading of Armstrong Dunbar's award-winning book, Never Caught: The Washingtons’ Relentless Pursuit of Their Runaway Slave, Ona Judge. Copies are available to borrow from participating libraries. Ebooks and are available through Overdrive.

Free and open to the public, with a FREE round trip direct bus from UMass. Book signing to follow.

Erica Armstrong Dunbar is the Charles and Mary Beard Professor of History at Rutgers University. Her publications, teaching, and documentary appearances have placed her among a small number of African American women scholars who study black life, culture, and gender up to the Civil War. Dunbar received her B.A. from the University of Pennsylvania, where she majored in History and African American Studies and her Ph.D. in History from Columbia University.

Dunbar’s first book, A Fragile Freedom: African American Women and Emancipation in the Antebellum City was published by Yale University in 2008, and it is widely used in college and graduate classrooms across the country. Her newest book, Never Caught: The Washingtons’ Relentless Pursuit of Their Runaway Slave, Ona Judge, is a startling and eye-opening look into America’s First Family. Never Caught is the powerful narrative of Ona Judge, George and Martha Washington’s runaway slave who risked it all to escape the nation’s capital and reach freedom. Never Caught was named as a 2017 non-fiction finalist for the National Book Award and it was also named a finalist for the prestigious Frederick Douglass Book Prize. The Middle-Grade Reader of Never Caught will publish in January 2019.

In addition to her monographs, Dunbar has published peer-reviewed essays that have appeared in collections by Yale and NYU Press, has co-edited a special issue of Pennsylvania Magazine of History and Biography on the 150th anniversary of the Emancipation Proclamation, and has penned numerous book reviews and encyclopedia entries. She serves on the editorial board for the Race in the Atlantic World series (UGA Press) and was selected as a Distinguished Lecturer for the Organization of American Historians. From 2011-2018, Dunbar made history by becoming the inaugural Director of the Program in African American History at the Library Company of Philadelphia, the nation’s first library and one of its oldest cultural institutions.

With her recent op-eds and articles in outlets such as the New York Times, The Nation, TIME, and the Philadelphia Inquirer, Dunbar has built a name for herself outside of the academy. Her expertise is in high demand from scholarly communities and media outlets such as CNN, The Nation, and the LA Times. She has appeared in numerous documentaries such as several episodes of “Philadelphia: The Great Experiment” as well as “The Abolitionists” an American Experience production on PBS.

Barbara Krauthamer is Dean of the Graduate School and Professor of History at UMass Amherst.  She is a widely recognized historian of African American slavery and emancipation in the United States.  Her published work includes Black Slaves, Indian Masters: Slavery, Emancipation and Citizenship in the Native American South and Envisioning Emancipation: Black Americans and the End of Slavery, which she co-authored with Deborah Willis.  This book received the 2013 NAACP Image Award for Outstanding Work in Non-Fiction.  In addition to her scholarly work, Barbara also writes for general audiences and appeared in the award-winning documentary film, Through a Lens Darkly: Black Photographers and the Emergence of a People.  Barbara has received numerous grants and fellowships to support her research, and in 2017 she received the Lorraine A. Williams Leadership Award by the Association of Black Women Historians in recognition of both her scholarship and her success at creating educational and professional opportunities for Black women students and faculty.  Barbara received her bachelor’s degree from Dartmouth College, a Master’s degree from Washington University in St. Louis, and her Ph.D. from Princeton University.

Venue: Note the new location! This event has *moved* to First Churches of Northampton, which is located in downtown Northampton at 129 Main St. On-street parking is available in the area around the church. In addition, there are several city parking lots close to the church (see map here). The closest are the Gothic St Garage ($0.75/hr; open after 5pm weekdays, and open 24 hrs on weekends), and the Masonic St and James House lots ($0.25 – $0.75/hr, free after 6pm and on Sundays). The building is wheelchair accessible via the entrance on Center St. A shuttle will be available from the original location.

Transportation from UMass: A FREE round trip direct bus from UMass will depart from Haigis Mall at 6:15 p.m. and will return directly following the event, arriving at Haigis Mall by approx 9:15 p.m. Reservations are encouraged, and any remaining seats will be available on a first come, first served basis on the night of the event. Reserve tickets here.

Directions and Accommodations: If you need directions or additional assistance to plan your visit, or to request specific accommodations, please contact the History Department's communications assistant, Adeline Broussan, at communications@umass.edu.

About All Hamptons Read

Copies of Never Caught are available to borrow from the participating libraries and locations in Northampton, Westhampton, Southampton and Easthampton. Ebooks and eaudio are also available through Overdrive.

Visit the Feinberg Series webpage for more information about the series.