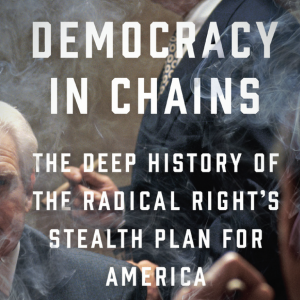 Join the Jones Library's Civics and Democracy Series, the UMass Amherst History Department and the Center for Popular Economics for a community discussion of “Democracy in Chains: The Deep History of the Radical Right's Stealth Plan for America” by award-winning historian Nancy MacLean.

Democracy in Chains is an explosive exposé of the little-known thinker behind the radical right’s relentless campaign to eliminate unions, suppress voting, privatize public education, stop action on climate change, and alter the Constitution. A finalist for the National Book Award, it has been described by Publishers Weekly as “a thoroughly researched and gripping narrative… [and] a feat of American intellectual and political history.” Booklist called it “perhaps the best explanation to date of the roots of the political divide that threatens to irrevocably alter American government.”

The conversation will be facilitated by economist and educator Francisco Perez of the Center for Popular Economics.

Copies of the book are available at the Jones Library, through the CWMars Library System and at your friendly neighborhood bookseller.

The Jones Library is wheelchair accessible.

The Civics & Democracy Series is made possible thanks to support from the Friends of the Jones Libraries and the Woodbury Fund.