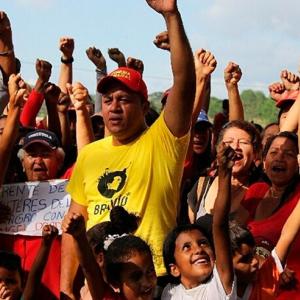 Venezuelan communes are radical experiments in grassroots democracy and economic production. Today there are approximately 500 communes around the country, which do everything from growing food to running community media stations. The communes reject the authoritarian and bureaucratic version of “communism” that existed in the Soviet Union, insisting instead on participatory decision-making. Though former President Hugo Chávez (1999-2013) encouraged the communes’ development, their relationship to the Venezuelan state has often been fraught with conflict. As Venezuela struggles to confront deep economic and political crises, can the communes chart an alternative path forward? Atenea Jiménez, founder of the National Network of Communers, and radical political theorist George Ciccariello-Maher will examine the communes’ history, achievements, challenges, and global significance. Moderated by Kevin Young, UMass Amherst History Department.

Free and open to the public. This event will be in Spanish with simultaneous English interpretation. It will be fully accessible to both Spanish and English-language speakers with no time delay for translation.

Atenea Jiménez Lemón has worked as a sociologist and organizer in Venezuelan popular movements since the 1990s. In 2009 she founded the Red Nacional de Comuner@s (National Network of Communers). Since then, the network has grown to include around 500 communes and 100 social movement organizations throughout Venezuela. She also founded the Universidad Campesina de Venezuela (Venezuelan Peasant University). She recently edited a book entitled La toparquía comunera: Concreción de la utopía (Rule by Communes: Concretizing Utopia) (2014).

George Ciccariello-Maher is an organizer, writer, and radical political theorist. He is author of Building the Commune: Radical Democracy in Venezuela (Jacobin-Verso, 2016), a study of Venezuelan communes and the political dynamics of the post-Chávez era. He has also written a longer history of revolutionary movements in Venezuela ntitled We Created Chávez: A People’s History of the Venezuelan Revolution, published by Duke University Press in 2013. His third book, Decolonizing Dialectics, was published by Duke University Press in 2017.

Kevin A. Young (moderator) is an Assistant Professor of History at UMass Amherst. He is the editor of a forthcoming book entitled Making the Revolution: Histories of the Latin American Left, and also wrote Blood of the Earth: Resource Nationalism, Revolution, and Empire in Bolivia (2017).

If you need directions or additional assistance to plan your visit, or to request specific accommodations, please contact the History Department's communications assistant, Adeline Broussan, at communications@umass.edu.

About the Feinberg Series

Visit the Feinberg Series webpage for more information about the series, including a full list of co-sponsors and community partners.