The operational posture of the UMass Amherst campus is currently at "Guarded." For more information, go to www.umass.edu/spring.

Learn more about the free COVID-19 vaccine clinic for eligible participants being conducted at UMass Amherst. For detailed information, go to www.umass.edu/coronavirus/vaccine. 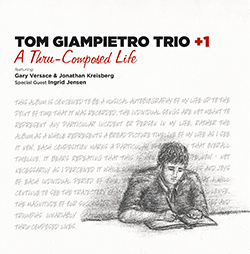 The new release consists entirely of new instrumental compositions by Giampietro, all of which are all autobiographical in nature. The eight tracks are organized sequentially to reveal the composer’s reflections on a particular period in his life from his vantage point in the present moment. “The album as a whole represents a broad picture timeline of my life as I see it now,” commented Giampietro in the CD’s liner notes. In reflecting on the revelations achieved in the course of creating this “musical autobiography,” Giampietro sounded a cautionary note: “The magnitude of our successes, failures, joys, sorrows, challenges and triumphs invariably change as we gain perspective - sometimes for the better and sometimes for the worse.”

Ear Up Records is the brainchild of Grammy-winning saxophonist Jeff Coffin, known to many as a member of the Dave Matthews Band. He described Giampietro’s new CD as “a stellar, standout recording with some of the finest improvisors on today’s scene. ‘A Thru-Composed Life’ sounds to me like a warm blanket on a cold day.” Giampietro was an original member of Coffin's eclectic jazz group the Mu-tet, and performed on the group’s critically acclaimed CDs, Go Round, and Commonality.