UMass Reopening: Chancellor Kumble Subbaswamy has released the university’s Fall 2020 Reopening Plan, which details how the fall semester will proceed amid the COVID-19 pandemic. For more information and to read the comprehensive report, FAQs and other materials, go to umass.edu/reopening.

We Haunt While You Watch: "The Hum"

The 26th Annual Massachusetts Multicultural Film Festival is proud to present a multi-media talk and screening of "The Hum" (2018) by Kristen Gallerneaux. The event will include a reading from High Static, Dead Lines: Sonic Spectres & the Object Hereafter (2018, Strange Attractor Press) and screening of The Hum (2018, Kristen Gallerneaux, USA, B&W, 25 min, in English)

The evening begins with a multimedia reading featuring glitchy video visuals and a score of original ambient compositions. These recall an upbringing surrounded by supernatural superstition and sonic experience - and then dive into the ghostly crosstalk of television piracy, late night sign-offs, and test patterns. Next, a screening of The Hum. Not everyone can “hear” the Hum, but the vibroacoustic effects of infrasound causes victims to describe it as something that is felt more than heard. The Hum reconstructs a visual and sonic impression of the spatial, psychic-industrial, and physiological effects of this mysterious event. The soundtrack samples interviews with the Hum-afflicted, field recordings of the phenomena, and “sonified” local dirt with the use of an analog synthesizer—in sonic solidarity with the environment.

The film and talk will take place at 7:30PM on Wednesday, April 24, in the Isenberg Flavin Family Auditorium (SOM 137). 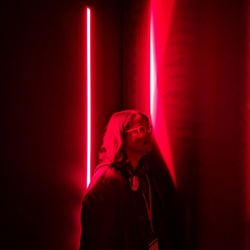 Kristen Gallerneaux is a self-described "Disgruntled Artist/Sonic Researcher," according to her website. She is also the Curator of Communication and Information Technology at the Henry Ford Museum. Her experimental short film The Hum premiered in 2018 at Moogfest, where Gallerneaux was featured as a Future Thought Speaker. Her book, High Static, Dead Lines: Sonic Spectres & the Object Hereafter was published in May of 2018. It is a collection of essays and criticism that creates a "literary mixtape that explores the entwined boundaries between sound, material culture, landscape and esoteric belief."