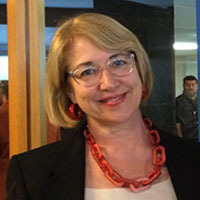 Skyler J. Arndt-Briggs holds an AB in Romance Languages & Literatures from Princeton University and a PhD in Cultural Anthropology from UMass Amherst. From 2002-2005, she organized a collaboration with the Center for Contemporary History in Potsdam, Germany, that brought seven semester-long lecturers to teach at UMass, culminating in a panel at an NEH Summer Institute organized with Barton Byg in 2005. She has written on practices of place in Weimar Republic Berlin, the US reception of East German cinema, the impact of the June 17, 1953 uprising on GDR filmmaking, and the films of director Iris Gusner. Since 2002, she has also nurtured research on the international dimensions of East German cinema through biennial Summer Film Institutes and a fall 2011 conference on this topic, which she organized in collaboration with colleagues at UMass and the Academy for Film and Television in Potsdam. The resulting edited volume, DEFA International is now being translated into English and will become the first in a new book series on Film and the Global Cold War, which she is launching with Berghahn Books.