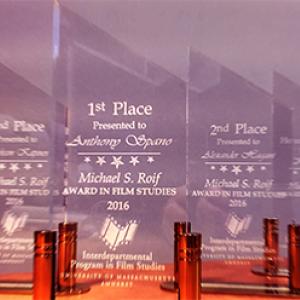 The Michael S. Roif Award in Film Studies is a competitive annual prize awarded to students enrolled in the University's Undergraduate Film Studies Certificate Program whose film, video, or moving-image-media work demonstrates exceptional creativity and accomplishment. In a given year, at least one prize must be awarded for production or screenwriting. If more prizes are awarded, one may be given for a scholarly essay.

The award is based upon a gift, made by his family, in honor of Michael S. Roif, a University alumnus and film enthusiast.

Instructors of university film/video or related courses may nominate up to two students. Students may not apply directly. Nominees must be university Undergraduate Film Studies Certificate students who have completed a film/video/moving-image-media project in a University film/video or related course taken during the past three semesters. Award winners must be undergraduates in good standing at the University of Massachusetts Amherst at the time the award is conferred.

Awards Ceremony takes place every year on the First Friday of May. Winners must be present.

Nomination are due April 26th. Ceremony will be held on May 7th, by Zoom.