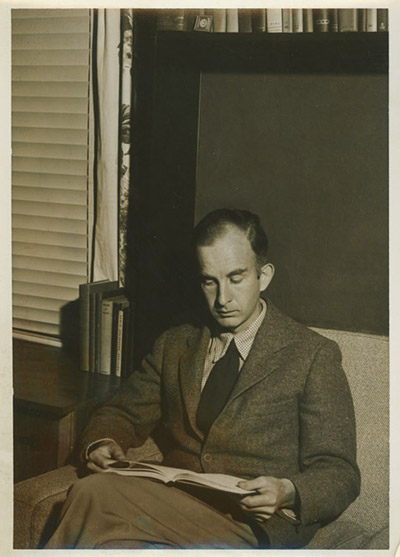 Walker Gibson (1919-2009) was Professor of English at the University of Massachusetts Amherst from 1967 to 1987. He served as Director of the Rhetoric Program, the forerunner to the present Writing Program. He also began, in 1970, our doctoral program in Composition and Rhetoric Studies. Nationally, he was active in the National Council of Teachers of English, serving as President in 1973. Gibson was the author of numerous poems, essays, and books, including Tough, Sweet, & Stuffy: An Essay on Modern American Prose Styles. Gibson’s papers are part of the UMass Special Collections and University Archives.

In addition to the annual lecture, we also honor Professor Gibson through the annual Walker Gibson Prize for best graduate student essay on a topic in composition and rhetoric written in an English Department seminar during the preceding year. Funding for both the Lecture and the Prize come from the UMass Amherst English Department and the University Writing Program.

2019: Steve Parks, Associate Professor of Writing and Rhetoric, University of Virginia, "Steps Toward Justice: From Syracuse to Syria"

2015: LuMing Mao, Professor at Miami Univeristy, Ohio, "The Rhetoric of the Other: Re-Presenting Facts of Nonusage."

2014: Kristie Fleckenstein, Professor of English at Florida State University, "'A cartoonist shall blunt his barb': Reading (Anti)Suffrage Caricature within Its Visual Media Ecology."

2012: Peter Mortensen, Associate Professor of English at the University of Illinois at Urbana-Champaign, “Manufacturing Illiteracy in the United States, 1880-1930”

2010: Neal Lerner, Program in Writing and Humanistic Studies, Massachusetts Institute of Technology, "One Hundred Years in Holyoke: The Life and Death of Educational Reform"

2008: Deborah L. Brandt, Professor of English at the University of Wisconsin-Madison, “The Status of Writing”

2007: Catherine Prendergast, Associate Professor of English at the University of Illinois at Urbana-Champaign, “’We Live and Learn’: English and Ambivalence in a New Capitalist State”

2005: John Trimbur, Professor of English at Emerson College, “Linguistic Memory and the Politics of U.S. English”

2019 Winner:
• Ashley Canter for "Affect and Hope: Tracing and Subverting a Neoliberal Rhetoric of Personal Responsibility"

2017 Winner:
• Florianne Jimenez for "Necropolitical Soundscapes: Ambient Sound in Two NPR Podcasts” (this essay also went on to win the RSA Gerard A. Hauser Award for 2018)

2016 Winner:
• Kelin Loe for "Our Avian Alumni: An Exploration of the Rhetorical Ecology of the University of Massachusetts Amherst"

2014 Winner:
• Dan Ehrenfeld for "Knowledge, Rhetoric, and 'Delivery Systems': A Theoretical Framework for the Study of Historical Rhetors"; this essay also went on to win the RSA Gerard A. Hauser Award for 2016.

2013 Winners:
• Travis Grandy for “Rumblr on the Tumblr: Rhetorical Action and Participatory Audiences"; and
• Jessica Ouellette for "Engendering a (Neo)Liberal Subject: Gender, Literacy, and Human Rights"

2012 Winners:
• Hari Kumar for "Performing/Writing/Learning Bodies and Texts: Critical Pedagogies and Performances in the Composition Classroom"; and
• Jessica Ouellette for "A Digital Critical Consciousness: Investigating a Critical Pedagogy of Writing within a Global Context"

2010 Winners:
• Sarah Finn for “A Transgender Pedagogy”; and
• Morgan Lynn for “Fleshing Out White Rhetoric about Race: Using Affect and Social Materialist Critique in an Anti-Racist Pedagogy”

2009 Winners:
• Christopher DiBiase for "Anonymous: A Case Study of Public Formation through Digital Discourse"; and
• Amber Engelson for "Expanding our Communicative Horizons: A Study of Linguistic Diversity in the U.S."

2005 Winner:
• Brian Houle for “Notes on the Implications of Writing on the Semantic Web”

2004 Winner:
• Lauren Rosenberg for “Speaking Out and Writing Back: Looking at Discursive Performance and The Body”

2003 Winner
• Elizabeth Keller for “Rebuttal to The Gutenberg Elegies: a Positive Prognosis for a World of Electronic Technology”

2002 Winners
• Thomas Batt for "The Rhetoric of the End Comment";
• Susan Johnson for "Inside Stories: Virginia Woolf's Writing and Letters to My Dad"; and
• Rita Jennifer Rich for "Mute, Alive, and Awake: d/Deaf Readings of Women's Ways”

2000 Co-Winners
• Mya Poe for “On Writing Instruction and a Short Game of Chess: Connecting Multiple Ways of Knowing and the Writing Process”; and
• Margaret Price for “The Pedagogies Surrounding Plagiarism: Toward a New Perspective”

1999 Winner
• Susan Kirtley for “Revealing Voice: An Examination of Scholarship on Feminism, Computers, and the Composition Classroom”

1998 Winner
• Lynne Bodon for “I confess my weakness”: Sexual Politics and The Letters of Heloise and Abelard

1996 Winners:
• Mary Reda and Date Dionne (co-authors) for “Students, Writing, & Technology”; and
• Michelle Valois for “Do You Think You Know Me Better? On the Discovery of What it Means to be a Writer”

1995 Winners:
• Wesley Blixt for “Writing Across Razor Wire: Reflections on Prison Teaching”;
• Thomas Deans for “Rhetoric and Poetics, Composition and Literature: Towards Difference, Parity and Dialogue”; and
• Wini Wood for “Into WAC: Writing and Language During the Early Stages of Disciplinary Exploration”

1994 Winners:
• Alan Girelli for "Short-Term Memory and ‘the Monitor’ In the Flower and Hayes Cognitive Process Model”; and
• Charles Huschle for “Wat, Freire, Etc.”

1993 Winners:
• Tim Doherty for "Rising to the Occasion: Improvisation in College Writing";
• Fran Muse for "Trusting Words to Tell the Truth"; and
• Mary Norcliffe for "Vatic Voice and the Farming of Daydreams”