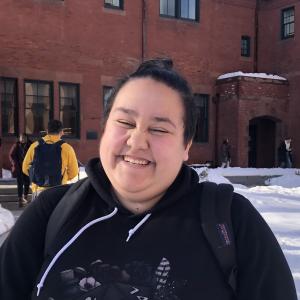 Mindy Diaz is a senior, double-majoring in English and Anthropology.

That’s a long story! I’ve actually been considering English since fourth grade when I had this English teacher that read Inkheart to me. That was the moment where it clicked in my mind that, “Oh, I can write—I can do that.” Not dissing on Inkheart or anything, I love the book, but it was just the first time I was exposed to fantasy in that way, and that started my interest in writing. And then in fifth grade, I had a teacher who always encouraged me to write, so from that I developed a love of writing, and then I just spiraled out of control.

You also study anthropology, right? Do you find your two majors intersect at all?

Scarily so. It’s really weird; some of the courses I’ve taken within the English department will line up with some of the stuff I do in Anthro. Like, I was taking a course on the Middle East [in the Anthropology department] and I was also taking one of my favorite English courses, the Arabian Nights class [taught by Professor Mazen Naous], so there’s been a lot of, “Oh, I’m talking about Orientalism in one class, and then I’ll talk about it again in my English class.” Right now, I’m taking a dragon mythology course and I’m thinking about using some of that information for my thesis. There’s a lot of overlap just because of how the study of culture happens between the two. Of course, English is more literary-focused, but Anthro has a lot of that too.

So you’re doing a thesis? What are you doing for that?

That’s a good question. I’m not really sure yet. I have too many ideas—that’s my problem. Especially with taking Professor Hennessy's class for the thesis, I have too many options and I can just free write, which is probably what’s going to end up happening. I’m most interested in the idea of writing an epic poem and maybe sprinkling in some visual storytelling with that too, so that should be interesting.

So you’re really into mythology—what attracts you to mythology? Why do you think it’s important?

I don’t have a good answer for that that doesn’t make me sound rude. I’m interested in mythology because I don’t understand religion in general, and I find interesting how those stories and lessons are told and also the practical element of the religions that follow those stories and beliefs… which makes me sound like a total alien in disguise. Along with that, it’s just good storytelling, and it’s not the kind we have as much today. We have retellings of these myths but they don’t really stack up to [the originals]. Especially some of the old English stories—they had a weird type of storytelling that I would love to see today but I just don’t see it so I end up having to go look in the past for it.

Have you done any internships relating to English?

I’ve worked with a few independent authors and have done editing for them. I was mostly doing it to get experience but also just to read their stories because I love reading so much—especially books from people who aren’t very well known.

How did you get those gigs?

Facebook! There’s a big community on Facebook for young adult literature, and I love young adult literature—honestly, if you ever need recommendations, I’m definitely your person. There’s a lot of people trying to get their feet wet in the industry and publish their stuff, and they’re always looking for people to beta read and help them edit, and a lot of them don’t really have the income to go to an actual agent or are self-publishing. There was one specific group on Facebook dedicated to helping indie authors find test-readers. [Editor’s note: There are several such communities on Facebook, such as Writers Helping Writers, Indie Author Group, Fiction Writing, etc.]

If you could talk to yourself freshman year, what would your advice be?

Do you have anything else you want to say?

At least regarding the English major specifically, take what you’re interested in… just find what’s interesting to you and stick with those classes, because most of the time you’ll be able to fill your requirements with those. Also, find professors you enjoy and take multiple classes with them. For instance, the way Professor Naous taught Arabian Nights especially stuck with me; I was exposed to some of my favorite required readings of college. Also, whenever I see him around, he says hi and asks how I’m doing which is super nice. Professor Black [who taught English 201] is also another one of my favorites. I loved the way he contextualized the influence of the texts by bringing in things like manuscripts and objects that had iconography of the texts we were studying.