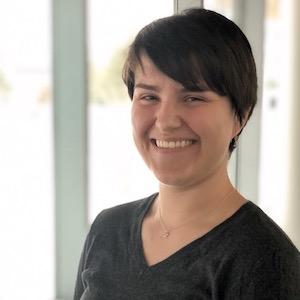 Emily Cerri is a senior English and linguistics major. She is a member of the Commonwealth Honors College, the University of Massachusetts Amherst Marching Band, and the HFA Student Leadership Board. View her LinkedIn profile to learn more or to connect with her!

How would you describe your experience as an English student?

What is your honors thesis about and what, specifically, are you analyzing?

So, my project is looking at how a video game called NIER critiques fairy tales. NIER is an action role-playing video game developed in 2010 by Cavia and published by Square Enix. The game is split into two parts; in the first half, the father (who is also the player) is trying to find a cure for his terminally-ill daughter, and he spends the second half of the game killing monsters in search of her. There are four endings to the game, and each playthrough the game gives more information about the world. The director, Yoko Taro, drew inspiration for the game from 9/11 and the War on Terror.

With fairy tales you only get one side of the story, and there’s really as many truths as there are witnesses. I want to look at gender and sexuality and how the video game critiques the stories through a queer lens, using queer theory. I also want to talk about how the game is relevant due to its representation of gender and sexual diversity, and its lack of racial diversity.

What was the inspiration for your project and what prompted you to choose this queer lens?

I just really like this game, and I guess I was kind of looking for an excuse to look at it. I also really like fairy tales so it was really cool—I got to look into the history and look at the original tales, I looked at the Disney remakes, and some other remakes of these tales. So, I kind of got to focus on two things I like! My professor from last year and now my chair, Professor Caroline Yang, mentioned queer theory and I thought that was really interesting, so I wanted to look at that more. So, I decided this would be a great excuse to learn more about queer theory.

Can you describe the process of looking at these fairy tales and the analyses you perform on them?

My argument is that NIER uses fairy tales to show their disconnect to the reality of differences in race, gender, class, sexuality, religion—stuff like that. It uses the genre and structure of fairy tales to talk about different perspectives because there are multiple sides to each story.

Queer theory can refer not only to gender and sexuality; it can refer to a non-normative lifestyle. The norm is the expectation; when expectations are subverted, this could be argued as being queer.  For example, fairy tales normally are definite about what is good and what is bad, and there's almost always a happy ending. While NIER follows a fairy tale-like story, the characters are more nuanced and nobody gets to live happily ever after.  The monsters become sympathetic; the main characters are vilified. One example is fighting an enemy named Gretel, a direct reference to the fairy tale "Hansel and Gretel." In a cutscene, the player sees Gretel is talking with other smaller monsters and decides to protect them.  However, soon after the main characters enter and begin killing all of the monsters. Here, the roles are reversed: Gretel and the monsters are the sympathetic characters, the targets of an unfair attack by the malicious protagonists. There are instances of queer characters in the game in terms of gender and sexuality that I plan to discuss as well.  While their identities are only subtly hinted at, it is important to look at how they fit in something that uses the fairy tale genre.  How are they used, and is it a good form of representation?

Why do you think studying video games matters? What kind of impact does this have in academia and the world?

This a good question and a very important topic. Games are a relatively new media, but they have enormous potential. They have been studied since they were first introduced, and now that they have become so much more complex, they have become powerful tools that can be used to send messages or teach lessons.

There are many aspects of a game that can be studied, such as its rule structure, gameplay, subversive techniques, and emotional impact.  Some of these topics are unique to games, which creates new angles and techniques for studying literature. Playing with the game's rule structures and mechanics, even in ways that aren't often encouraged, allow players to find the extent to which storytelling can go. Overall, they add to the definition of "literature" and present a new way to study human culture. I especially want to look at the subversive and representational potential of games, which is a popular field of research in game studies.  There's a severe lack of racial, gender, and sexual diversity in games that is honestly quite alarming.

Have you utilized any on-campus resources throughout this project such as the library or Digital Media Lab?

Yes, I have been at the library so much. This is the most I’ve ever used the library. I am there like every week! Research, reading, requesting books, stuff like that. Using the library to find online sources—it’s been nuts because it’s mostly just research. I don’t use the Digital Media Lab for this, but I just want to give it a shoutout because it’s really great. I actually am taking a class on video games and we have been using it, so it’s been super helpful for that. Actually, it’s with someone who is also my committee—Professor Russworm. It’s English 494DI: Dystopian Games, Comics, Media. She’s an excellent professor.

Have there been any challenges in your research? Any surprises?

Yes! It took me a while to actually find a direction. There’s just so much that I want to talk about that narrowing it down is really hard. I didn’t really know how to study video games at all because I didn’t really know that that was a thing. So, I had to read a lot about it and then Professor Russworm’s class has been instrumental in helping me figure out how to do this.

Were you close to any faculty or staff before this project and do you think you would have otherwise built a relationship like this had you not been pursuing an honors thesis?

I’ve taken two classes with Professor Yang, so I’ve kind of gotten to know her better. So, I felt comfortable going to her to ask for help. This is a great way to get students to know the faculty better.

Do you have any suggestions for future students taking on their own honors thesis project?

Definitely get to know your professors as best as you can. Try and come up with a very specific topic so you’re not going all over the place, and try and stick to it. And definitely never feel afraid to ask for help.

So, what happens next?

When I finish the manuscript, which I am starting now, I will have to defend it orally in front of my committee, so in front of Professor Yang and Professor Russworm. The manuscript is just a big essay. I’ve scheduled my defense for the end of April.