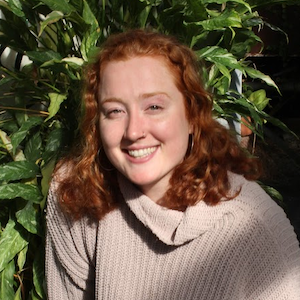 Claire Wixted is a senior English major, pursuing a specialization in Creative Writing. She also has a minor in philosophy. She is involved with the Boltwood Project and interned in the Springfield museums.

How did you become an English major? What has your journey looked like so far?

When I started at UMass, I really didn’t know what I wanted to do at all, in terms of a major. I thought I was going to do Environmental Science for a little bit. I got here undeclared and tried a bunch of Gen Eds. I took Chemistry 111 and 112 because I thought that if I did end up going the Environmental route, that would be helpful, which I didn’t do, but it was good to have the chemistry knowledge. So I was thinking about Environmental Science, then Sustainable Food and Farming classes. Then I reached the end of my freshmen year and I didn’t really know what I wanted.

Over the summer, I was struck by the fact that I had never taken an English class in college since I took AP English in high school and placed out of the College Writing Gen Ed. So I thought it was odd that I hadn’t taken English even though I loved doing it in high school and I thought I’d try out some English classes in the fall [sophomore year]. I’m really into reading and writing, and thinking about things, so I thought I could use writing as a way to facilitate my interest in science-y things. I thought, if I do English, it’ll improve my ability to be an analytical thinker. I’ll be able to read Science Journal articles and communicate them better to people because I’ve practiced my reading and writing skills for four years. I also always thought my college writing experience would look like discussion-based classroom settings sitting with other students and talking about big picture ideas, de-constructing the way the world is, and looking at the multi-layeredness of everything. That is what I thought I could find in English classes, so that is what lead me to the English major.

Are you involved in any extracurriculars or internships?

During my time at UMass, I was a member of the Boltwood Project for seven semesters, which is a service learning organization that facilitates social engagement programs for individuals with disabilities. There are many sites that different groups from Boltwood go to, so that was something I did throughout college.

I did an internship through the Honors College at the Springfield museums. I worked in the arts discovery center facilitating arts and crafts programs for kids who would come into the museum with their families, to help them engage with the artwork.

Are there any English classes that have been memorable to you?

Well, the first English class that I had—English 200: Intensive Literary Studies—I really liked. We read a bunch of short stories and because the stories were short, we could look at each aspect of the story in depth. That was fun and it was my first taste of the major. I remember really enjoying it. We had such lively class discussions. It was taught by Joselyn Almeida-Beveridge and she, as a teacher, made me feel empowered as an English major. She told me that my arguments in class were really thoughtful and was telling me I was going to be a defense attorney or something, not that I want to do that, but it made me feel really good.

I also liked English 350H: Expository Writing with John Hennessy. I really liked the reading for that class, like Slouching Towards Bethlehem, which is still my favorite book since I came to college. I really liked that class and it showed me what you can really do with writing. I thought we had really thought-provoking discussions too.

This fall, I took South African Lit with Stephen Clingman (who is also on my thesis committee!) and I loved that class. So many of my English teachers have been so thought-provoking. He stands out as one, so thoughtful, interesting, and genuine. There’s also Ruth Jennison, who I took my junior writing class with. I also took her Revolutionary Poetry class. She just blew my mind consistently, every class. Which is why I love this major because it is so thought provoking.

Want to learn more about Claire's thesis? Check out her Honors Thesis Spotlight!