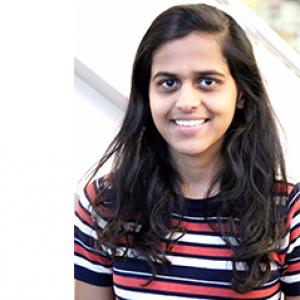 Earlier this semester – on what later became a “once upon a time” kind of a day – I was sipping tea in a coffee shop in New York City with a cabin bag by my side and no place to stay the night when my phone beeped, notifying me of an email from Penguin Random House. I had received the opportunity to intern in the marketing department at the Knopf Doubleday imprint. I expected myself to scream and cartwheel down the streets, but instead found myself emailing my supervisor to confirm the news.

When it did sink in, Oscar Wilde’s words echoed in my head. “There are only two tragedies in life: one is not getting what one wants, and the other is getting it.” Please don’t get me wrong – I had been working on the internship application for the past year and receiving the opportunity to intern was a two-year dream come true – but the scary thought of living in the ‘city of cities,’ alone and for the first time took the form of a pointed needle and pricked my massive rainbow-hued bubble of happiness. I had grown to love Amherst - like I had loved no other place in the world. I loved that its city center was a one-street downtown and that its mountains were my backyard. However the thought of interning at the birthplace of some of my favorite books kept my spirits high and helped me bid Amherst a goodbye.

The office hardly looked like one - more like the library I dreamt about spending my life in. The lobbies and cubicles were walled by books of all colors and sizes. My team at Knopf was equally, if not more, animated than the space itself. Their warm smiles and the massive pile of manuscript “slush” greeted me with arms wide open - and I couldn’t have been happier.

Working with slush helped me sharpen my analytical skills. In the past I had always analyzed a book for its characteristic elements and had never really judged its success as a book. The process of picking out a book with building tension, relatable characters, and high stakes from a pile of other manuscripts that were devoid of intervening subplots or an explosive climax was most enlightening (and a teeny bit scary). Who was I to decide whether a book was good enough or not? As a marketing intern, I also tried to evaluate the feasibility of the book and monetize it: by examining the genre in demand at that given point of time, the success patterns of recently published books with similar plot lines, and the existence of the book’s intended readers in the contemporary society.

A lot was left to be done to market the books that were to be published at the end of the season. Posters, broadsides and bookmarks were to be designed, printed, and mailed to eminent people, bookshops and libraries; giveaways were to be created on Goodreads and other social media platforms; and respective author profiles were to be updated on the company website. A book that I specifically enjoyed working with was Chimamanda Ngozi Adichie’s Dear Ijeawele, Or a Feminist Manifesto in Fifteen Suggestions. Since it is a book on feminism, not only was it important to market the book, but also promote the concept and importance of the idea behind it. We started off with pulling quotes from the book, creating posters with them, and photographing them in the city streets for social media promotion. The marketing manager in charge of the book designed wonderful tote bags with the words (from the book) - “I matter. I matter equally. Not ‘if only.’ Not ‘as long as.’ I matter equally. Full stop.” The process of conducting giveaways and book contests with Adichie’s fans and later mailing the winners freebies of books and totes, was most enjoyable and interesting.

Outside of work, I was busy discovering new places and revisiting my favourite nooks in the city. A teahouse where I spent several quiet evenings reading; the SGI-USA cultural center where I would zone out from the rest of the city and meditate with people from all around the world; the many, many parks where I would just sit and observe. Families, artists, musicians, lovers, the homeless, chess maestros, the drugged, students and groups of people - cycling, skating, reading, protesting or even just skipping stones on water.

Somewhere amongst the bench behind the dog park in Union Square and the second floor of the hidden Panera Bread on 18th Street; the pages of Weike Wang’s Chemistry and the manuscript written by an Italian chef; the Malaysian lunch and the Spanish dinner; a conversation with a tourist from Netherlands and one with a New York native - I had found home. A “happily ever after” sense of home.