Written by Jen Adams and students in her Virtual Medieval class. The students' map projects are now on display in the South College lobby.

How would YOU map your time on the UMass campus? Got it?

But now, how would you do it with cartographical tropes from the medieval world?

I gave this challenge to my Virtual Medieval class this term, and the results amazed me.

When drawing their own campus map, many students drew heavily from the Hereford and Ebsdorf mappa mundis, two late medieval world maps that project geographical space through the lens of historical time. In keeping with a medieval world view, lands in the Middle and Far East dominate the top; Europe lies on the lower left; and Africa take up the lower right. This T/O framework in turn allows mapmakers to plot historical events. You can find the parting of the Red Sea, the fall of Adam and Eve, and the minotaur’s maze. For a medieval Christian world, these events are crucial teleological markers. Indeed, cartography is so tied to Christianity that the Ebsdorf mapmaker includes Jesus’s head, hands, and feet poking out of the sides.

Other students found inspiration in Matthew Paris’s twelfth-century Chronica majora, or Grand Chronicle. A thirteenth-century monk, Matthew designed the Chronica for his monastic community at St. Albans. This six-page map starts in London and ends in Jerusalem. By using flaps and folds, Matthew invites viewers to engage with a map and embark on an imagined, meditative pilgrimage to the Christian Holy Land.

All students used mapping to highlight cartography’s ideological investments and resist on the official narrative of space offered by a UMass map. Most people perceive contemporary maps as more “accurate” than their medieval predecessors.  Yet as this disquieting inverted world map makes clear, all maps see the world through an ideological lens. Yes, this map has more sharply defined shapes of continents than those in Hereford map. Yet his map distorts continent sizes, making Greenland as large as the entire African continent. The very title of “upside down” belies our collective embrace of a northern-superior globe. In the end, all maps are subjective. All of them. To remember that is to embrace the unique way that each person passes through the space of the world, and of UMass. To quote one of my students, “My map is mine and their maps are theirs, yet somehow we can all come to a certain understanding of the very things that make it ours.” 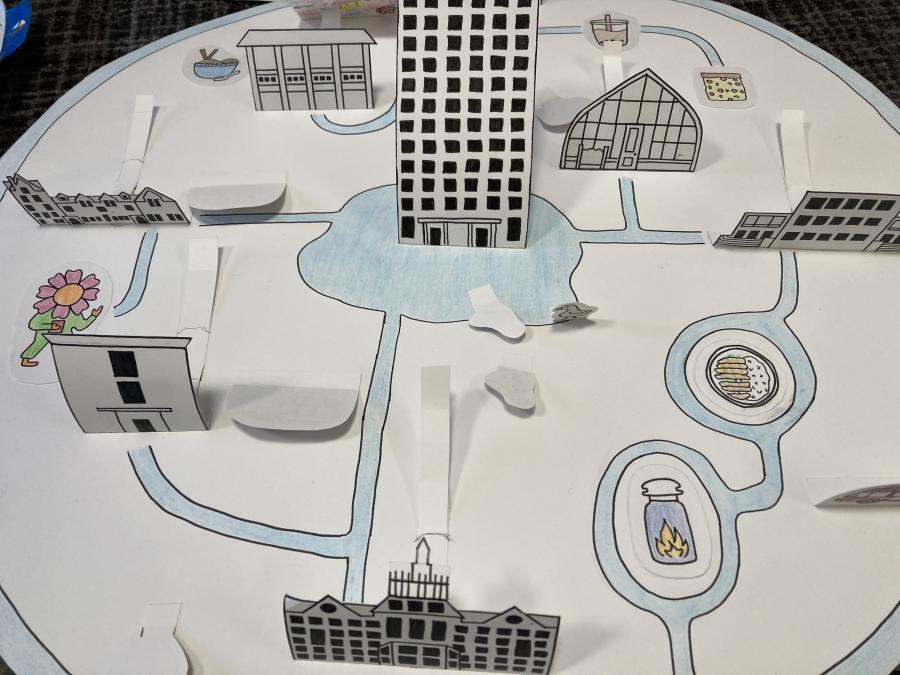 AC: I wanted to create my map in a way that allowed spectators to become participants in my personal journey, my pilgrimage. Each pull of a tab literally lifts the buildings, and consequently my story, off of the physical page. I begin to exist in more than a 2-dimensional space. And it is in that space where both the participant and I can share in a particular human experience—the hopes, the fears, and the thrilling absurdity of being a college student at UMass Amherst. 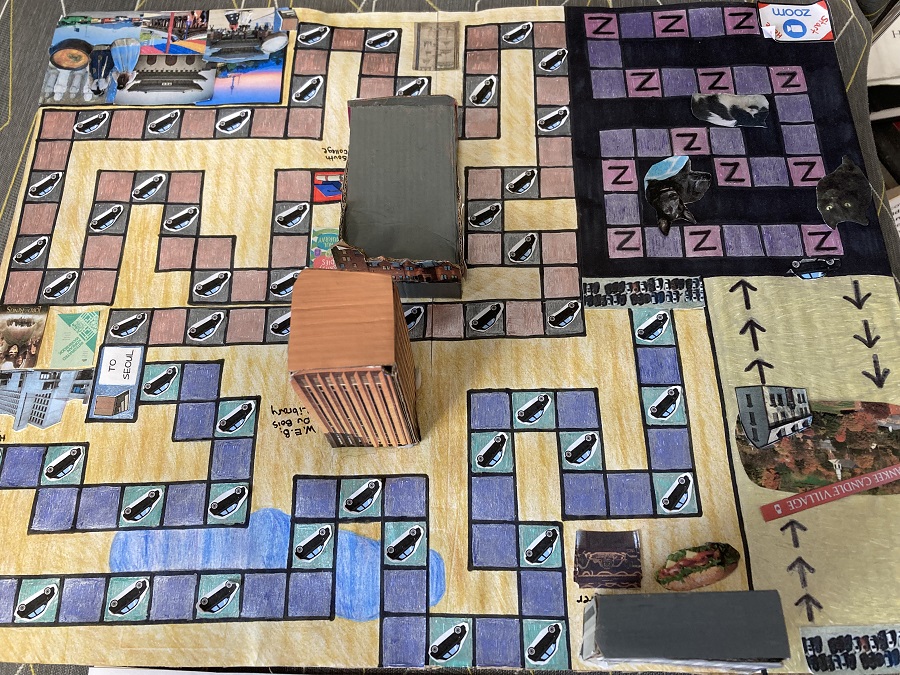 AS: I have mixed the likeness of the games Life and Clue with the pilgrimage maps created by Matthew Paris that we reviewed…. I chose to end the spaces near Herter Hall, where I took my Korean language class, with a bigger space including a trap door—a reference to Clue—and a little sign reading “To Seoul” to represent my journey to South Korea when I studied abroad last semester. I ended this section at Herter because that is where my connection to Korea began on campus.

BP: The map I created is contained between the covers of a Primo’s Pizzeria takeout box. I decided that the medium of my map should be a pizza takeout box because consuming pizza with friends is a fixture of the American college experience…. My first house off campus is represented as a nest because on the wall of our mudroom a previous tenant had painted “N.E.S.T.”. The acronym comes from the street name North East Street.

EE: When creating my own map, I was inspired to replicate Matthew Paris’s techniques, creating a map held in a book format, split up among multiple pages. To reflect that book format, I wrote a short introduction and used a piece of cardboard for the cover. …Covered by the flap is the Isenberg School of Management…so I marked it with a dog-headed Cynocephalus, one of a few barbarian tribes that medieval people believe lived somewhere on Earth. 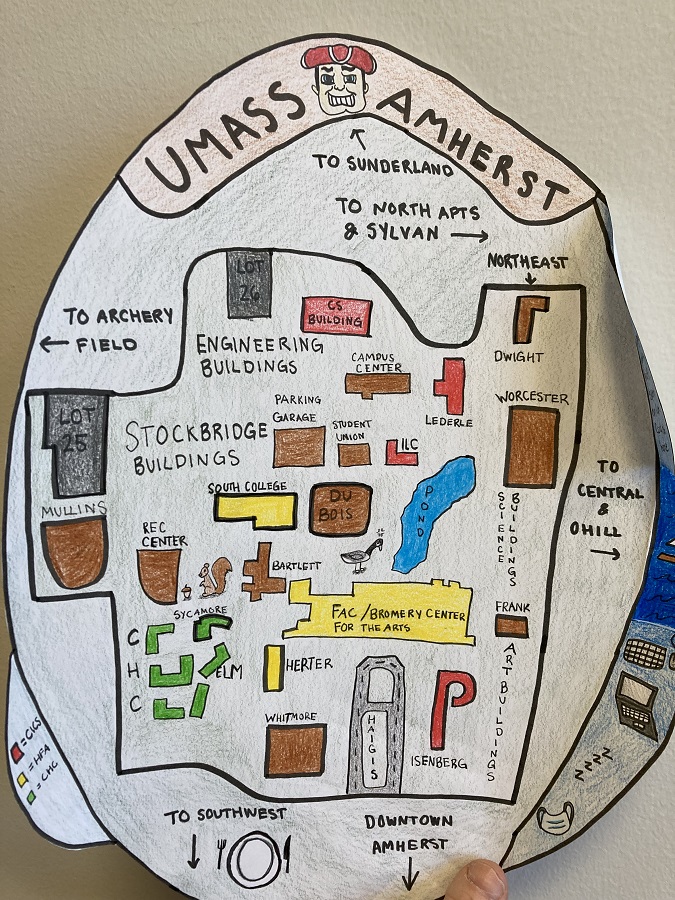 ET: On the right side of my map there are three large flaps …These flaps represent my year and a half spent at home on the Cape doing online classes during the pandemic. My parents were unemployed during the beginning of the pandemic, so we spent a few weeks on our sailboat that summer—hence the depiction of the sailboat and ocean on the second flap…Also on the third flap are letter Z’s representing the boredom and drudgery of online classes, as well as the ample amount of time I spent in my bedroom at my desk or in my bed.

HD: I designed my map as a way to explore my personal locations. There is no specific route the reader has to take. I would not recommend following my map for directions, since the placement of buildings and paths is not accurate… I marked my frequently visited spots on campus with a star, with an index that corresponds to the color of my year on campus. I wanted the reader to be able to make their journey and not have to follow a certain route.

GZ: Matthew Paris’ itinerary map flaps and route choices inspired the author to incorporate choice and change into [the map] through impermanent flaps... The buildings featured on Campus Crossing outlined in dark green are and represent impermanence on the map by being connected with low quality tape, making the buildings featured or their order easily editable. Not permanently fixing the location of buildings to the map’s page also lies in the impermanence of the creator’s relationship to different areas of campus and campus as a whole.

GC: I took on the challenge of taking aspects of UMass to legendary status in my map. Each flap became a portal that allows for fast transportation through campus to the football stadium, across the globe to Oxford, England, and even down to the darkest depths of the Christian Hell. My “Blemmy” came in the form of the recently Twitter-famous Phil O’ Connell, also known as the Sign Guy… on my map he is shown where he commonly haunts the rotary going into town.

HB: The first page is a representation of how I viewed UMass as a first-year transfer student… The campus felt huge when I first arrived, I knew there was plenty to explore and I wanted to see it all. Unfortunately, I only recently realized that that's simply not the case. As a transfer student who lives at home rather than in any of the dorms, a vast majority of the campus is closed off to me. I fear that if I wander into any of the residential areas, the fraternities and sororities, or the science and engineering areas, I would be trespassing.

JR: As a tour guide, I was taught that the campus is set up like a dart-board, with the W.E.B Du Bois library sitting at the center as its bullseye...The library–to me– is indicative of Ebstorf’s depiction of Sicily as the “heart” of the map…The brick hitting the person’s head right beside the goose at the top of my map is a reference to the mythical Tower of Babel depicted in the Hereford Mappa Mundi. The W.E.B Du Bois library is the tallest, red-brick, academic library in the world, and is a representation of the hubris of man.

LJ: The library was the first thing I drew on the map, because it represents the center of campus to me. I was also, again, inspired by the Ebsdorf Mappa Mundi, which put Jerusalem, arguably its most important city, at its center. The library is important to me both because of what it represents (knowledge) and how it helps me navigate. It is so tall that it is the first thing I look for if I’m ever lost – from there, I can usually find my way.

LB: In addition to my design choices of how to represent the UMass campus, I chose to include several stories from Greek mythology after seeing similar imagery in the Hereford mappa mundi…The first myth that I represented in my map was that of Atlas the Titan holding up the sky on his back… Between classes and preparing myself for graduation at the end of this semester, I have often felt like Atlas at times this month with a lot on my shoulders.

ML: Connected to McNamara and opposite Furcolo is a mysterious location known only as the “Banana Shack”. Those who have lived near McNamara/Northeast may recognize it by name, but for those who do not, the Banana Shack is a small hut (a storage shed, perhaps?) that seems to always have a healthy supply of bananas resting atop it, likely procured from the nearby Worcester Commons.

NO: The second map reflects sophomore year and is significantly less structured than the other two, matching the dissolution most of us felt during this strange time. …This map was inspired by Paris’ other itinerary maps, the Map of the Holy Land and the Map of Italy. I thought these ones would fit best for this year as it didn’t have as much structure within the map itself. On my map, I drew an image of the Pioneer Valley, a representation of this land that some of us left behind…

SJ: The first noticeable object drawn in my map is this giant gold brick building, which is meant to be the core physical foundation to the campus. It is similar to the Jerusalem…In my map I purposefully added a river connecting to the door of the library, even though the actual campus pond is just a little bit further. The reason I have illustrated the water with a strong current is because it is a difficult journey to pursue and acquire knowledge, hence the little figure of a human struggling to swim to the door.

ER: In depicting people, I went for the style of Ancient Greek pottery. I have experience working in this style before, and I’ve always found it compelling. Additionally, I knew I wanted to include a lot of individual figures, especially to communicate the crowded bus from 31 Sunderland, and there were plenty of trace references online of human figures in this art style. Being ancient and frequently depicted, it lent [itself] to a medieval feeling which I felt appropriate for this class…

CM: The map that I created of the UMass campus is deeply rooted in both space and time. The areas of campus where I have never been were not included in the map at all. For example, the Sylvan residential area got neither a flap nor any representation on the map itself. This is mainly because in my experience on the UMass campus, Sylvan has little to no significance at all… The more time I had spent in a building, the more care I put into representing it.