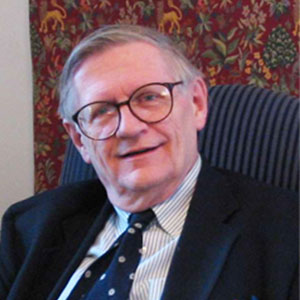 Arthur Kinney has retired. Yes, you heard that right. The learned and amiable colleague who was here when we came and promised to say farewell to us really has retired. He will remain a valued resource, but we shall miss his presence. The Bible says when bad things happen in a community, “Tell it not in Gath, lest the Philistines rejoice.” I don’t know where Gath is, but I do know not even Philistines want less of Arthur. Modern words seem inadequate to mark his graceful exit from our department’s stage. Should we paraphrase Othello: “If we see thee not, Chaos is come again”? Should we become really emotional and use Lear’s “Thou’lt come no more, Never, never, never, never, never”?

Hardly. Without doubt, Arthur’s two dozen books, anthologies, encyclopedias, essays, and radio talks have illuminated tragedy for us. His work on William Faulkner occasionally spotlights humor, but, like Shakespeare, he knows calamity. Still, we best characterize Arthur in the triumphal language of comedy. (He did, after all, write a biography of Dorothy Parker.) His publications leave the world improved, more united and happier. “Take but them away,” as Ulysses almost warns, “and hark what discord follows.” Throughout his stellar career, he has united people and ideas.

The scholarship that continues to impress academia complements his mentoring achievements. How many students have profited from his example? From my experience, his activities as a fellow teacher most impress me. Way back when many of us youngling professors arrived, Arthur would host teaching parties in his South West quarters. There how much we learned from those who have gone on yet deserve to be remembered. Paul Sanders shared his approach to Job, Charlotte Spivack modeled lessons on Dante; Don Cheney helped us with Spencer; John and Betty Hunt, Bernard Spivack and Normand Berlin interpreted Shakespeare; Bob French and Dan Collins suggested ways to communicate seventeenth-century authors; Stanley Kohler loved Milton; Alex Page and Morris Golden familiarized us with Enlightenment writers. The cooperation and outreach Arthur encouraged in us all helped transform our department from an excellent assemblage of committed instructors to its current eminence internationally.

Two ongoing achievements guarantee that Arthur will never leave us. He founded English Literary Renaissance, certainly the preeminent journal of the era today. Let’s elevate academic writing and allow Shakespeare to praise it: “Not marble, nor the gilded monuments Of princes, shall outlive this powerful publication.”

True, his words and those of other scholars endure, but buildings also help commemorate Arthur’s productive tenure. Specifically, the Renaissance Center, his concept, his execution, continues to become even more central to world scholarship. The nearly countless speakers, guest researchers, seminars, dancers, singers, gardeners and sword fighters have and will entertain and instruct until (we hope), as Hotspur says, “Time … Must have a stop.” Until then, and if the roof doesn’t leak or the windows shatter, we can joyously chant in the words of Horace, “He has created a monument more lasting than bronze, And higher than the royal site of the pyramids, Which neither harsh rains nor the wild North wind Can erode, nor the countless succession of years And the flight of the seasons.” Every future presentation at the Center will have Arthur in the audience and us at his side.