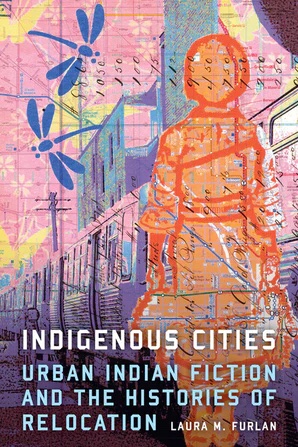 The paperback edition of Laura M. Furlan’s Indigenous Cities: Urban Indian Fiction and the Histories of Relocation was just issued by the University of Nebraska Press. Writing in the Journal of American Ethnic History, Kara Wilson called the book, “A must-have for anyone interested in current scholarship that centers on Indigenous literature, history, and
decolonizing methodologies.”

In Indigenous Cities Laura M. Furlan demonstrates that stories of the urban experience are essential to an understanding of modern Indigeneity. She situates Native identity among theories of diaspora, cosmopolitanism, and transnationalism by examining urban narratives—such as those written by Sherman Alexie, Janet Campbell Hale, Louise Erdrich, and Susan Power—along with the work of filmmakers and artists. In these stories Native peoples navigate new surroundings, find and reformulate community, and maintain and redefine Indian identity in the postrelocation era. These narratives illuminate the changing relationship between urban Indigenous peoples and their tribal nations and territories and the ways in which new cosmopolitan bonds both reshape and are interpreted by tribal identities.

Though the majority of American Indigenous populations do not reside on reservations, these spaces regularly define discussions and literature about Native citizenship and identity. Meanwhile, conversations about the shift to urban settings often focus on elements of dispossession, subjectivity, and assimilation. Furlan takes a critical look at Indigenous fiction from the last three decades to present a new way of looking at urban experiences, one that explains mobility and relocation as a form of resistance. In these stories Indian bodies are not bound by state-imposed borders or confined to Indian Country as it is traditionally conceived. Furlan demonstrates that cities have always been Indian land and Indigenous peoples have always been cosmopolitan and urban.

For more information about Furlan's work, see her faculty profile.