Last week, Steve Parks, Associate Professor of Writing and Rhetoric at the University of Virginia, delivered the annual Walker Gibson lecture. His talk, titled, “Steps Toward Justice: From Syracuse to Syria" addressed how scholars within English Studies can work toward justice. He described his own experiences with the Westside Residents Coalition, an anti-gentrification campaign in Syracuse, New York and Syrians for Truth and Justice, a human rights organization in Istanbul, Turkey. 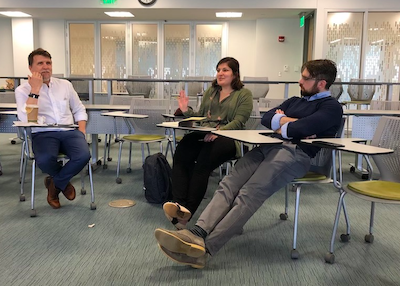 During his visit, Parks met with graduate students in Composition and Rhetoric, offering mentorship, advice, and insight about developing as scholars within the field. Graduate student Ashley Canter says, "Speaking with Steve Parks about his community literacy work was inspiring! He had valuable and guiding insights for those of us who are interested in being involved in that work." Later, during a meet and greet session, Parks chatted with PhD students Jenny Krichevsky and Kyle Piscioniere about New City Community Press, a community publishing company that he founded and directs. 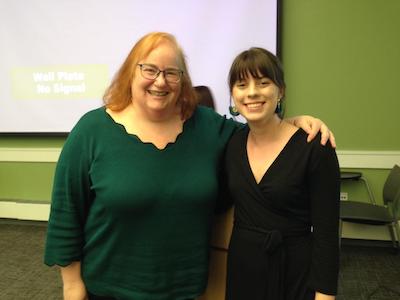 Before Parks's lecture, Canter was recognized as this year's winner of the Walker Gibson Prize. The Walker Gibson Prize is awarded annually to the best graduate student essay on a topic in composition and rhetoric written in an English Department seminar during the preceding year. She received the prize for her paper, “Affect and Hope: Tracing and Subverting a Neoliberal Rhetoric of Personal Responsibility," which was composed in professor Donna LeCourt's course, Political Economy and Writing, in Spring 2018.