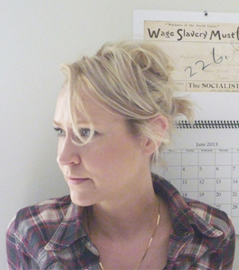 Ruth Jennison received a Ph.D. from the University of California, Berkeley and a B.A. from Bryn Mawr College. Professor Jennison is the recipient of an Andrew W. Mellon Fellowship at the Harry Ransom Humanities Research Center at the University of Texas, Austin, as well as a National Endowment for the Humanities Summer Stipend.

Professor Jennison is the author of The Zukofsky Era: Modernity, Margins and the Avant-Garde. The Zukofsky Era argues that Objectivist poetry, inaugurated by Louis Zukofsky in 1931, gave expression to the complex contours of culture and politics in America during the Great Depression. Her study of Zukofsky and two others in the Objectivist constellation, George Oppen and Lorine Niedecker, elaborates a dialectic between the formal experimental features of Objectivist poetry and its authors' progressive commitments to the radical potentials of modernity. Mixing textual analysis, archival research, and historiography, The Zukofsky Era shows how Zukofsky, Oppen, and Niedecker braided their experiences as working-class Jews, political activists, and feminists into radical, canon-challenging poetic forms. Using the tools of critical geography, The Zukofsky Era offers an account of the relationship between the uneven spatial landscapes of capitalism in crisis and the Objectivists’ paratactical textscapes. In a rethinking of the overall terms in which poetic modernism is described, The Zukofsky identifies and assesses the key characteristics of the Objectivist avant-garde, including its formal recognition of proliferating commodity cultures, its solidarity with global anticapitalist movements, and its imperative to develop poetics that nurtured revolutionary literacy.