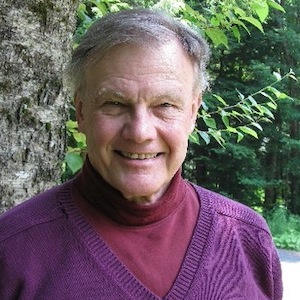 Robert "Bob" Bagg is Professor Emeritus of English. He was Department Chair, Graduate Director, and a professor of writing, world literature, romantic poetry, Victorian poetry, modern poetry, and more. He was a member of the UMass Amherst's English Department's faculty from 1965 to 1996.

He has written and published six books of poetry throughout this career and has held Guggenheim, Ingram Merrill, Rockefeller (Bellagio Residency), NEA, and NEH fellowships. His collection Madonna of the Cello (1961) was a finalist for both the Pulitzer Prize and the National Book Award. Recently, Bagg has focused on translating Greek plays, which have been staged in 74 productions on four continents. Let Us Watch Richard Wilbur: A Biographical Study was published in 2017 and co-authored with his wife, Mary Bagg. His most recent translation, Four by Euripides: Medea, Bakkhai, Hippolytos & Cyclops, will be published in November of 2019 by the University of Massachusetts Press.