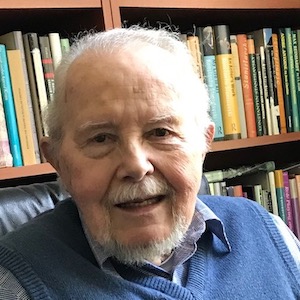 Joseph Donohue is Professor Emeritus of English. He taught Shakespeare, modern drama, and related subjects in the department for thirty-four years, from 1971 to 2005. A theatre historian and textual scholar with major interests in British drama and theatre, his books and articles have explored questions including the nature of dramatic character, the process of dramatic composition, and the history of theatrical production.

In the last few years he has completed editions of a group of Oscar Wilde’s plays for the Oxford University Press series of Wilde’s complete works, including The Duchess of Padua and Salomé (Plays 1, 2013) and The Importance of Being Earnest, four-act and three-act versions, along with an edition of a little-known fragment called “A Wife’s Tragedy” (Plays 2, Plays 3, 2019). He is at work on a summarizing study to be called Oscar Wilde and the Theatre.