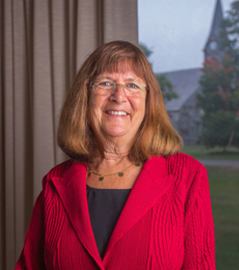 Jenny Spencer teaches courses in modern and contemporary drama and performance theory.  Her book, Dramatic Strategies in the Plays of Edward Bond, was published by Cambridge University Press in 1992 and her co-edited anthology, Staging Resistance: Essays on Political Theatre with Michigan University press in 1997.  Her latest anthology, Political and Protest Theatre since 9/11: Patriotic Dissent, was published by Routledge in 2012.  She has also published articles on the plays of Marsha Norman, Adrienne Kennedy, Mark Ravenhill, Tony Kushner, David Edgar, and Lillian Hellman.  Her current interests include contemporary theories of audience and affect, documentary drama, and feminist performance.  Professor Spencer has served as the President and as Faculty Advocate for the MSP, and is currently Chair of the English Department. She founded the Edinburgh Fringe Theatre Festival summer abroad course that takes place every August.