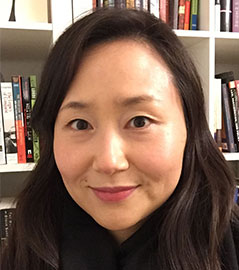 Caroline H. Yang received her B.A., M.A., and Ph.D. in English from the University of California, Berkeley, Boston College, and the University of Washington, Seattle, respectively. Before coming to UMass, she was an assistant professor in the Asian American Studies Department at the University of Illinois, Urbana-Champaign and a visiting fellow at the James Weldon Johnson Institute for the Study of Race and Difference at Emory University. She is the author of The Peculiar Afterlife of Slavery: The Minstrel Form and the Chinese Worker in American Literature, which focuses on blackface minstrelsy as a US cultural institution that played a crucial role in literary representations of the Chinese during and after Reconstruction. Her next project centers on figures and spaces of work and war in late twentieth century and contemporary Asian American and African American literatures in the context of global racial capitalism and US militarism.

Book:
The Peculiar Afterlife of Slavery: The Chinese Worker and the Minstrel Form. Stanford University Press, 2020.