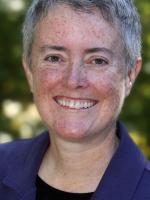 M.V. Lee Badgett is a Professor of Economics and a distinguished scholar at the Williams Institute on Sexual Orientation Law and Public Policy at UCLA’s School of Law. She recently was a lead member of the internal EEOC task force to create the Commission’s research and data plan. Her book, When Gay People Get Married: What Happens When Societies Legalize Same-Sex Marriage, addresses the core issues in marriage debates in European countries and the U.S. Her current research projects include an analysis of the first years of EEOC data on sex discrimination charges that are related to sexual orientation and gender identity. She has also used EEOC data to study the impact of statewide sexual orientation and gender identity nondiscrimination laws on employers. Her most recent book, The Public Professor: How to Use Your Research to Change the World, shows how research can be better communicated to policymakers, businesses, lawyers, the media, and the general public.