There are three industries central to the production and distribution of oil and gas in the United States. Oil and Gas Extraction is a mining industry. Petroleum and Coal Manufacturers convert both energy sources to usable fuels. Gas pipelines is a transportation industry delivering oil and natural gas from production sites to consumption. The latter is not exhaustive as some transportation is also done by rail and truck, although these cannot be identified separately. 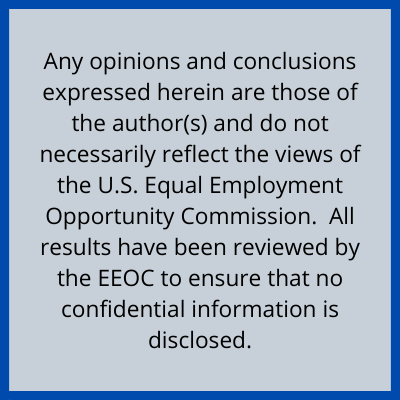 In this report we use information from EEO-1 reports and from the American Community Survey to assess the degree of employment equity in these three oil and gas related industries. The EEO1 reports describe workplace level employment composition and are submitted to the U.S. Evqual Employment Opportunity Commission by private sector employers with 100 or more employees, 50 or more if government contractors. The American Community Survey is collected by the U.S. Bureau of the Census and is used to describe the U.S. population.

Oil and Gas extraction includes 619 reporting workplaces with 126,188 employees. Petroleum and Coal refining had fewer facilities (358) and employees (106,450). Pipeline employment was smaller still. All three are high wage industries with mean hourly earnings, considerably higher than the national average. In all three white men are substantially overrepresented relative to the national EEO-1 private sector workforce. Women and African Americans are under-represented in all three industries. Hispanic employees are slightly underrepresented relative to national population sizes, but only in Petroleum and Coal Manufacturing.

Industries vary greatly in their occupational mix and geographic location making simple comparisons to national labor forces potentially misleading. We developed baseline comparisons to two occupation specific labor pools. The first compares state level race and gender specific occupational employment to employment in the same occupations in the three oil and gas industries. The second refines the comparison to the broad sectors of mining, manufacturing and transportation respectively. The baselines represent reasonable estimates of the labor force available for the three oil and gas industries to hire from.

We also calculate earnings gaps relative to men for women and to whites for African Americans and Hispanics. In these estimates we statistically control for education, experience, hours of work, race (for women) and gender (for racial comparisons) and local labor market wage levels.

Tables 2-4 report the estimates of representation for the three industries for total employment and managerial employment based on these available labor pools. They report the deficit or surplus employment relative to an average of those two baselines, as well as the percent of workplaces with a statistically significant deficit relative to both labor availability baselines. In addition these tables report estimates of the wage gap relative to men (for women) and whites (for African Americans and Hispanics).

Policy Implications. There is ample room for improvement in terms of employment equity in the oil and gas industry. Employment levels for women, African Americans and Hispanics are generally well below labor market availability. Managerial employment representation is even worse. Pay disparities are high.

Firm level examination of current human resource practices in terms of recruitment, hiring, retention, and pay are appropriate responses. The Equal Employment Opportunity Commission, the Office of Federal Contract Compliance and others concerned with employment equity should pay particular attention to employment discrimination complaints against firms in these linked industries.

Oil and Gas Extraction: display substantial underrepresentation of women, African Americans
and Hispanic employees. The vast majority of workplaces display statistically significant deficits
in the employment of all three groups relative to comparable occupations in the same state.
Compared to other mining industries the exclusion of women is not as widespread, but still 40.7%,
45.2% and 60.2% of workplaces display significant underrepresentation of women, African
Americans, and Hispanics respectively.

All three groups are unlikely to be found in managerial jobs in the oil and gas industry than in the
comparison labor pools.

Both women and African Americans show some of the largest pay gaps across all industries in the
private sector. Women earn almost thirty percent less than men in the oil and gas industry, even
after adjusting for observed skills. African Americans earn 23% less than comparable whites in
this industry. The Hispanic pay gap is much lower at 7%, but is also statistically unreliable because
of small sample sizes. 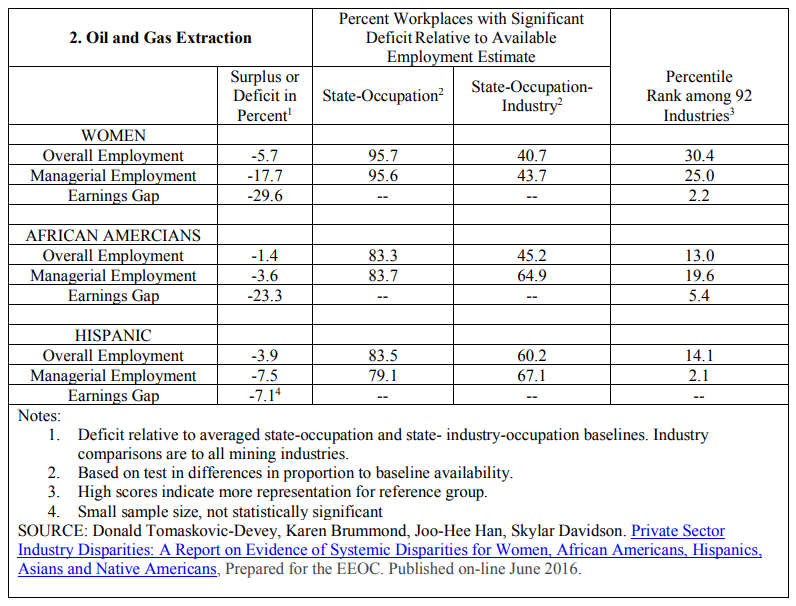 Petroleum and Coal Manufacture. Women and Hispanics are strongly under-represented in the
manufacturing arm of the oil and gas industry. All three groups are rare in managerial positions.
For all three groups a majority of workplaces display statistically significant shortfalls in overall
and managerial employment compared to state and industry-state labor pools. All comparisons
are among the lower third, often the lower 20% of industries. The one exception is African
Americans managerial employment whose 1.8% employment deficit puts petroleum and coal
manufacturing industry at about the national median. Wage gaps for both women and African
Americans are very high at 25.3% and 21.5% respectively. These are among the largest in the
U.S. private sector. Hispanic pay gaps are still substantial at 9.8% lower wages than comparable
whites, but this ranks in the 40th percentile, closer to the median industry. 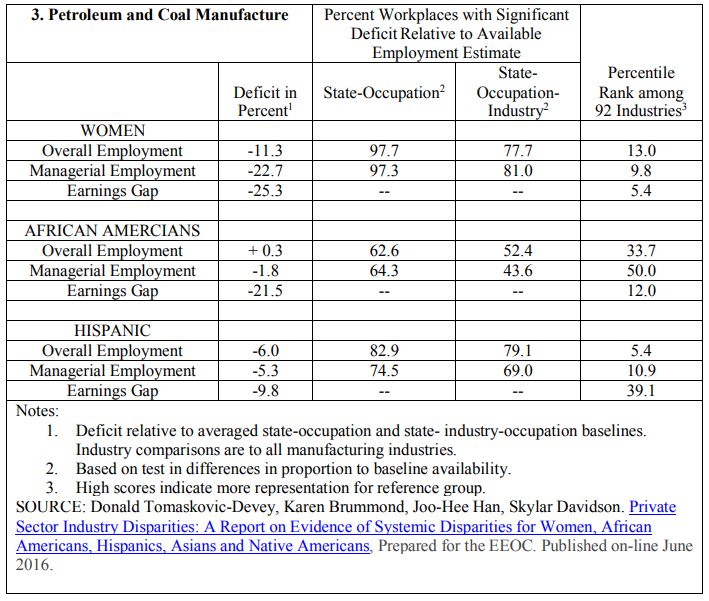 Pipeline Transportation. The majority of workplaces display statistically significant deficits in employment of women, African Americans and Hispanics relative to state occupation specific labor force availability. Compared to other transportation industries the representation of African Americans and Hispanics is particularly low. Wage disparities for women and African Americans are among the highest in the economy, in the third percentile of industries. We do not find a statistically significant wage disparity for Hispanics in pipeline transportation. Sample size is very small so it is difficult to say if treatment is more equitable. 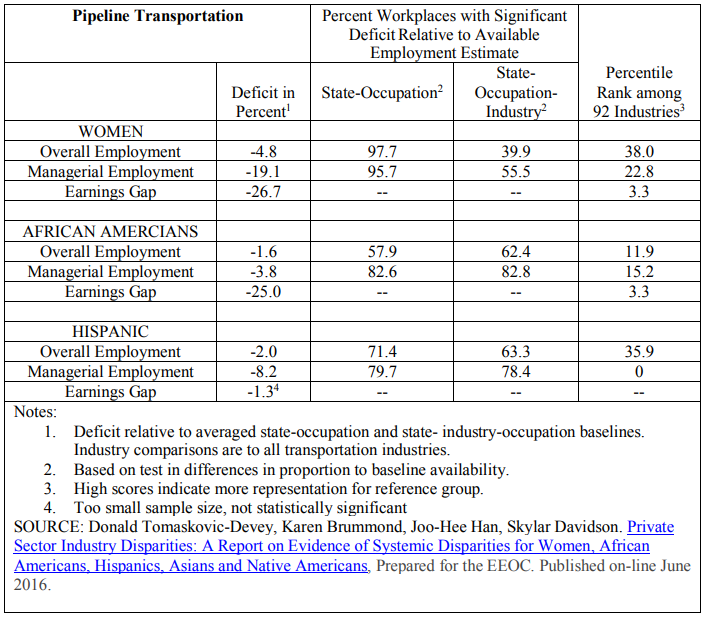