At the Center for Employment Equity, we have long been concerned with how poorly U.S. workers are treated, particularly low-skilled, low-wage workers, women, and minority workers. Tracking the COVID-19 pandemic and its subsequent economic impacts, it is becoming clear this crisis will hit these workers harder than all others. Focusing on low wage workers – those making less than $15 an hour –  we discovered a great deal of variation in terms of where people are most vulnerable to the current pandemic  and the coming COVID-19 recession. 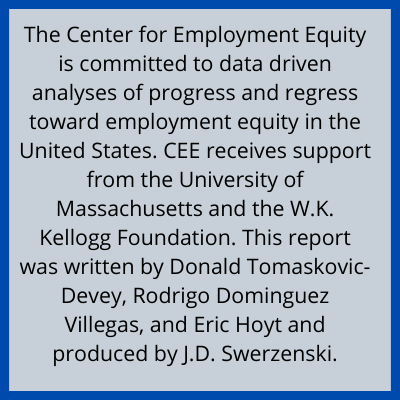 In this report, we first ask which states, sectors, and workers are likely to be most impacted. We then raise the issue of the next economic crisis, and ask whether the U.S. will be able to reform its labor market and health care systems to prevent future systemic emergencies from becoming unmitigated human disasters.

Not surprisingly, women of all races and minority men are most likely to hold the low-wage jobs, specifically those that we now rely on to service our households and that are about to disappear during the pandemic and in the recession to come. There is also great variation in these trends across different states. For example,  South Carolina and Mississippi, both of which specialize in low wage work and rejected  Medicaid expansion under the Affordable Care Act, are likely to suffer the most.

The U.S. is a rich country in which 40% of jobs pay poverty level wages. Low-wages and low or no health benefits are central to the business plans of many firms, particularly in retail, service, warehousing and agriculture. The COVID-19 pandemic and its economic consequences presents the U.S. with an opportunity to reject our low wage labor market structure and transition to an economy similar to that of other high-income countries: one characterized by jobs that deliver living wages, and a society that insures universal health care and job security in the face of illness.

It is clear that economic activity is slowing down rapidly both in the U.S. and around the world. Social distancing, stalling global trade, closing of borders, restaurants, and schools, as well as widespread illness are all going to contribute to the next great recession. Early estimates ranged between three and thirty-seven million jobs lost during the initial spread of the COVID-19 virus. Even the low-end estimates are larger job losses that the U.S experienced in the first few months of the Great Recession of 2007-2009. Nearly three million jobs were lost in just one week in mid-March, suggesting unemployment will be very, very high. Because the U.S. economy is built on both consumer spending and low wage service sector jobs, these numbers are bound to climb, perhaps to levels not seen since the Great Depression of the 1930s. Perhaps higher.

Current proposals to expand access to unemployment insurance, support businesses to keep workers on the job, and send money to households are useful short-term reactions to a crisis of this magnitude. Nevertheless, a deep recession will follow as both consumption and production stall, social distancing will continue, and businesses stay closed  sales tax revenue weak. For the poor and near poor among us rent and mortgage payments will be missed, homelessness will rise, and economic misery will intensify.

In the U.S. we have primarily relied on employment and employers to provide the safety net for families, while allowing employers to build businesses around low wage, no or low benefit labor. 40% of U.S. workers earn less than $15/hours, 24% do not have paid sick leave, 45% have no or inadequate health insurance, and very few have paid family leave to care for the sick and dying.

Figure 1: Percentage of Workers Making Under $15 by Gender/Race

Employees in service occupations are particularly vulnerable as restaurants, hotels, movie theaters, and sports arenas are closed. Occupations that provide direct services to consumers are usually low wage. 66% percent of all service workers make less than $15 an hour. The majority of all service workers in every state—with the lone exception of Hawaii—earn less than $15/hour. They have been among the first workers to lose their jobs as a result of the crisis. The threat of crowds and contagion likely will last for many months, so we can expect the coming recession to last for at least a year as we await the development of effective treatment and post-infection immunity spreads.

Unfortunately, low wages in service occupations are part of the business model that most U.S. service and retail employers have adopted. The U.S. stands alone among high income countries in its high inequality, low wage, precarious labor market structure. Restaurants and bars are the worst in this regard, with employers paying lower than $15/hour to 79% of all employees.

As shelter in place orders are issued across the U.S., households will increasingly rely on direct shipments of goods to their homes.  Agricultural, warehouse, port, and transportation workers will become more important than ever in maintaining supply lines of basic food and medical supplies.  58% of warehouse workers are paid under $15/hour. Trucking is only somewhat better, with 42% earning below $15/hour.  Almost all retail, service, and agricultural workplaces pay half or more of their workers below $15/hour. These jobs typically do not get employer provided health care or when they do offer inadequate, high-deductible health insurance.

Health care workers, perhaps the most essential at risk during the COVID-19 crisis, stand out as having been able to hold the line on wages and working conditions in recent decades. Workers in this industry have experienced the most significant increases in unionization rates, and have staged  most numerous and effective strikes over issues such as safe staffing.  Health care workers have pioneered a new form of social justice unionism which declares that “our working conditions are our patients’ healing conditions”.

Figure 2: Percentage of Workers Making Under $15 by Industry

There are some hopeful signs that, amidst the COVID-19 pandemic, other essential workers are following the lead of health care workers in winning important protections and wage increases. These actions are grounded in the spirit of promoting their own and customers’ safety and welfare.

For instance, in the transportation industry, after 15,000 UPS Teamsters signed a petition for the company to provide sick-pay in reaction to the COVID-19 pandemic, a settlement resulted in a new policy providing 2 weeks of paid time off.  Detroit bus drivers engaged in a one-day work stoppage to demand the introduction of  safety precautions on all city buses. They quickly won an agreement allowing riders to enter and leave the back door of buses, effectively ensuring all riders temporary free fares during the pandemic while also keeping drivers safe from close contact.

Regarding  warehousing, several U.S. Senators, including Presidential candidate Bernie Sanders, sent a letter to Amazon CEO Jeff Bezos requesting emergency wage increases for their employees. The effort resulted in the company announcing a doubling of their overtime pay rates, an across the board wage increase of $2 per hour, and the hiring of 100,000 new employees to meet increased demand for delivered goods.  Amazon workers in Sacramento, Chicago, and New York City have organized as Amazon Workers United, circulating petitions, engaging in short work stoppages, requesting (and winning) additional paid time off, and advocating for adoption of policies within warehouses that will slow the spread of COVID-19 at the worksite.

Grocery workers, 69% of whom earn less than $15/hour, are among the most essential personnel in the current crisis, providing a lifeline for  families under home quarantine.  The United Food and Commercial Workers (UFCW) union has convinced Stop & Shop, Safeway and other major grocery stores to install broad workplace safety protections as well as temporary  pay increases throughout the period of pandemic.

While it is clear that coming recession will especially depress wages, working conditions, and employment among service workers broadly, the increased social attention, appreciation, and bargaining power among essential workers pave the way for a rebirth of advocacy and organization among some workers within warehousing, trucking, and grocery retail in which women and people of color often predominate, and where low wages, temporary, and precarious employment have prevailed in recent years.  These workers may follow the trend of those in health care in winning greater social and economic power by linking their own workplace demands with the health and wellbeing of the communities in which they work.

Thinking about a Better Future

The consequences of the COVID-19 recession will be deep and lasting. Some states, particularly those that specialize in low wage employment like Arkansas, Mississippi, Idaho, New Mexico, and South Carolina will fare the worst. Among these Mississippi and South Carolina rejected the extension of Medicaid under Obamacare to their working poor and will fare even worse. Some industries, those that specialize in low wage, no benefit workplaces will either spread the virus as workers are forced to come to work in order to survive or shed their workers as their business model collapses in the face of sick workers and locked down cities.

The Trump administration’s proposal to send cash to every American has obvious short-term attractions for both economic and political reasons and resembles Democratic presidential candidate Andrew Yang’s proposal to institute a universal basic income (UBI) for all Americans. The problem with UBI is that it does not target the newly unemployed and working poor, nor does it fix our broken labor market and health care systems. Higher income transfers to the unemployed seem like a more efficient short-term policy. Denmark’s measures–guaranteeing 75% of employees salaries to avoid mass layoffs while simultaneously creating the conditions for social distancing–offers an even better idea.

The proposals championed by Democratic presidential candidates Sanders and Warren are closer to what the country needs in the longer run: high minimum wages, universal health care, and a strengthened labor movement. Many U.S. employers and some politicians will resist the idea of a strengthened labor movement. The problem is that the U.S. has for the last forty years pursued policies that strengthened the bargaining power of employers at the expense of employees, particularly lower skilled employees. It is precisely because of  our increasingly precarious, low wage economy that so many households and businesses in the  service sector are so vulnerable today.

If the recovery from the COVID-19 recession follows the path of the 2007-2009 Great Recession, it will generate mainly low-wage, low quality jobs, and we as a nation will have embraced our past failings yet again. The ability of the U.S. to respond to crises of any sort depends on the resiliency of its people and institutions. If we do not make access to health care, sick and family leave, and living wages a social right before the next economic crisis – whether it is financial, viral, or some new surprise – we will have failed again to learn the shameful lessons of our own history. If we do not disrupt the power dynamics that leave most workers exposed to insecurity and poverty level employment, we will leave our country vulnerable to economic and social collapse, perhaps now, certainly in future crises- whether economic or political.