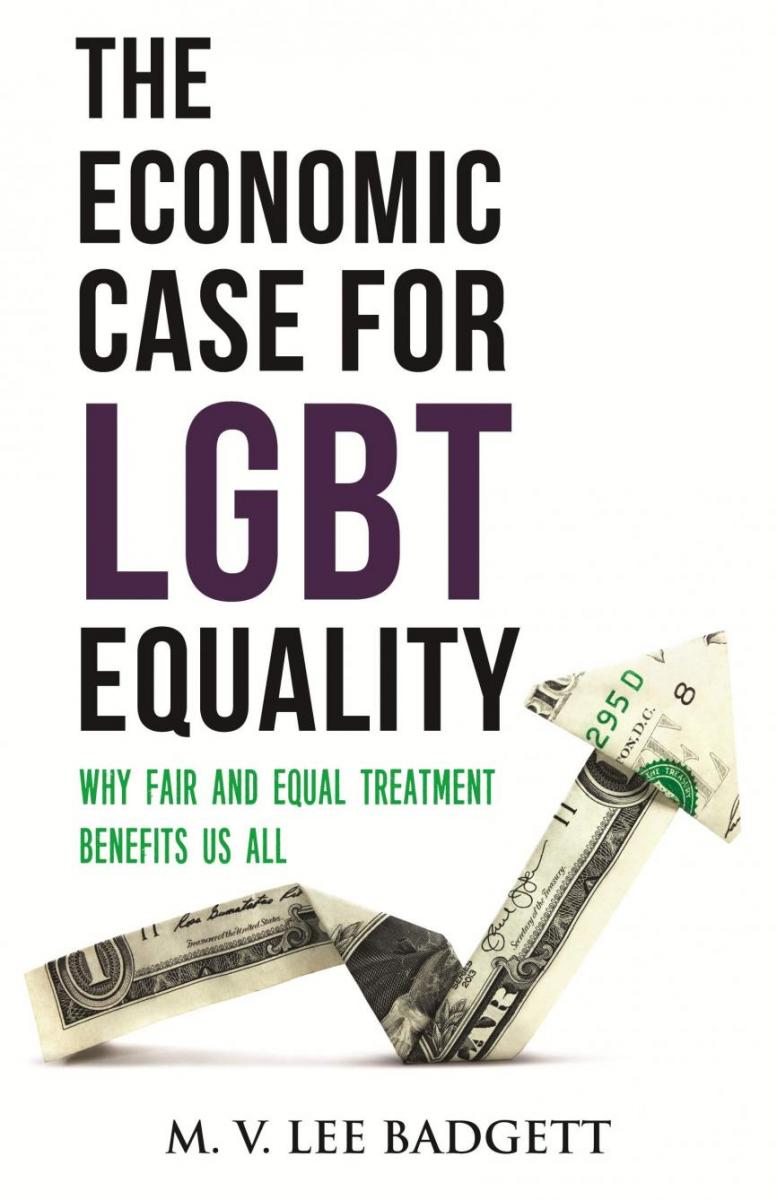 Finding that homophobia and transphobia cost 1% or more of a country’s GDP, University of Massachusetts Amherst economist M.V. Lee Badgett argues in a new book that in addition to moral and human rights reasons, we can now also make a financial argument for LGBT equality.

In “The Economic Case for LGBT Equality: Why Fair and Equal Treatment Benefits Us All,” published today by Beacon Press, Badgett uses recent research and statistics to analyze how hostile anti-LGBT practices and environments affect both the U.S. and global economies.

In a recent review of the book, the literary trade publication Kirkus Reviews wrote that Badgett’s “concise, sound arguments demonstrate why it is necessary to ‘expand freedom and equality’ across the globe,” and that the book is “both a convincing discussion and a call to reformative action for LGBT equality across economic sectors of the world.”

“The economic case works,” Badgett says. “In the U.S. we’ve seen it help us move toward marriage equality. The ability to marry was good for the economic well-being of LGBT families, and also brought new opportunities to local businesses. That example can be applied in many other parts of the world.

Badgett notes that LGBT equality remains a persistent and pertinent issue worldwide. The continued passing of discriminatory laws, the prospect of dismissal from jobs due to sexual orientation and or gender identity, harassment and bullying in school, the threats of violence and hate crimes on the streets, exclusion from intolerant families and the health effects of stigma all make it incredibly difficult for members of the LGBT community to live their lives.

In examining the consequences of anti-LGBT practices across multiple countries, including the U.S., Canada, the U.K., Australia, India and the Philippines, Badgett reveals the expensive repercussions of hate and discrimination, and how our economy loses when we miss out on the full benefit of LGBT people’s potential contributions. She likewise demonstrates how LGBT equality and inclusion within organizations increases their bottom line, thereby allowing for countries’ economies to flourish.

“The denial of LGBT equality is morally wrong,” says Janet Yellen, Distinguished Fellow at the Brookings Institution and former chair of the U.S. Federal Reserve. “Lee Badgett’s superbly researched book also shows the immense economic losses that result from this inhumanity. Eye-opening in its global scope, this book is a must-read for all business leaders and policymakers.”

A professor of economics and former director of the School of Public Policy at UMass Amherst, Badgett’s previous books include “Money, Myths, and Change: The Economic Lives of Lesbians and Gay Men” and “When Gay People Get Married: What Happens When Societies Legalize Same-Sex Marriage,” from which she drew in her testimony in the landmark Perry v Schwarzenegger trial challenging California’s Proposition 8 referendum banning same-sex marriage.

More information about the new book, and a link to purchase it online, is available on the Beacon Press website.