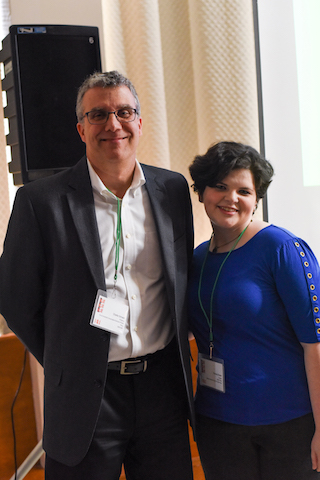 Professor Charlie Schweik of the UMass Amherst School of Public Policy and the Department of Environmental Conservation and two students traveled to Paris last month to present their World Librarians project at a United Nations Educational, Scientific, and Cultural Organization (UNESCO) conference, Mobile Learning Week 2018: Skills for a Connected World.

World Librarians aims to breach the “digital divide”—the gulf between the 53 percent of the world’s population that lacks access to the internet and those who have it—by bringing educational resources to teachers and students in Malawi. The UMass team, which includes students and staff from across campus, works in partnership with ShiftIT, an education organization in Malawi, and the California-based nonprofit World Possible, which developed the technology used by World Librarians. Schweik is one of a team of scholars at the School of Public Policy whose work includes a focus on policy related to science and technology.

Without the internet, “people don’t have access to the information they want to make their lives better,” Schweik explained at the recent UMass Information & Communication Technology Summit, where the team demonstrated the project. World Librarians addresses that problem through its work with nine rural, offline schools and libraries in Malawi. Each site is provided with a RACHEL, a portable server and Wi-Fi hotspot device developed by World Possible that’s loaded with open-access educational resources—such as Wikipedia and Khan Academy materials—that can be accessed by students and teachers in solar-powered computer labs.

In addition, teachers and librarians can request specific information by sending a message to World Librarians via Twitter. That’s possible, Schweik said, because cell phones are fairly common in developing countries and the small data demands of sending or receiving short Twitter messages is less costly to a user’s data plan than surfing the internet. When World Librarians receive a request—which might be anything from instructions on drying tomatoes, to guides to teaching Shakespeare, to materials to get girls interested in physics—the team’s two student “searchers” get to work.

“What makes this project unique is that we’re searching for what they ask for,” as opposed to presuming to know what they need, said project manager Pammy Eisner, a senior political science major who’s in the School of Public Policy’s accelerated master of public policy program. Too often, she said, the western world imposes on people in developing nations its assumptions about what’s best for them. World Librarians uses a peer-to-peer communication model and seeks feedback from the Malawi educators to ensure that the resources it sends meet their needs.

Finding those resources is not always easy. To avoid copyright infringement issues, World Librarians shares only open-license or Creative Commons material, which can be hard to find, noted Jeremy Smith, a UMass librarian involved with the project. The searchers also need to keep in mind the ages and English skills of the students who will use the materials; videos are best, Eisner said, because they’re typically more accessible than written material.

Once the right resources are found, the UMass team puts it on a Google drive, then someone at ShiftIT loads it to a flash drive and physically delivers it to the requesting school or library. Students and teachers can access the material in their solar-powered computer labs, with machines provided by UMass, and can save it on inexpensive flash drives provided by the project.

World Librarians is growing, adding a rural health center to its list of sites in Malawi and exploring an expansion in Cameroon. The goal, Schweik said, is to scale up the project, bringing it to more countries, offering resources in more languages, and finding other universities to join the effort.

The group’s trip to the UNESCO conference was supported by the School of Public Policy, the College of Social and Behavioral Sciences, the UMass Libraries, the School of Earth and Sustainability, the Department of Environmental Conservation, and the Commonwealth Honors College.