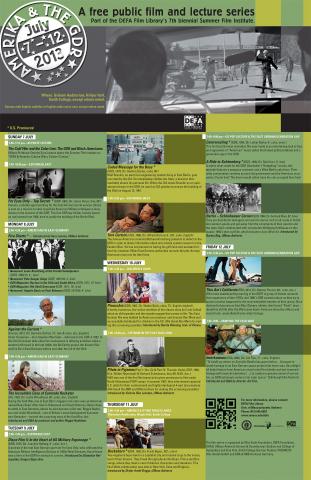 The DEFA Film Library’s 2013 Summer Film Institute capped off the long-term research project of expanding and internationalizing inquiry into GDR cinema by exploring the impact on GDR filmmaking of social and political events of the Cold War era and its relationships with other parts of the world. After focusing on Eastern Europe (2003), Western Europe (2005), Latin America (2007), the remaining Third World (2011), this Institute looked into relations with the USA, conceived of in the East Bloc as the great capitalist enemy and source of dissolution. That the content and approach that we have cultivated over the course of this long-term research project are gaining widespread acceptance is evident from recent publications—such as the co-edited volume DEFA International: Grezüberschreitende-Filmbeziehungen vor und nach dem Mauerbau (Wiesbaden, 2013), which was nominated for the Willy Haas prize—and a six-panel series on “GDR Film and the Global Cold War” at the German Studies Association conference in October 2013.

With thirty participants from the US, Canada, Germany and Great Britain, the 2013 Summer Film Institute was a great success. It was facilitated by Institute co-organizers Skyler Arndt-Briggs (DEFA Film Library Executive Director) and Victoria Rizo Lenshyn (PhD candidate, UMass Amherst), as well as the DEFA Film Library’s Founding Director, Barton Byg. Opening events including a keynote lecture on “The Cold War and the Color Line: The GDR and Black Americans” by UMass Professor Emerita Sara J. Lennox, followed by a reception in the lovely Atrium of the Smith College Art Museum, and the US premiere of the 1963 DEFA spy thriller, For Eyes Only – Top Secret. We were pleased that Professor Lennox also participated in the daily workshop sessions and facilitated a discussion of her lecture and related readings.

In addition to challenging readings and a public film series—which included many films that are very rarely screened and were carefully selected from the archives in Germany—during the week long Institute we were very happy to be able to welcome two guest speakers.

We were also pleased to have Dr. Benita Blessing (University of Vienna)—a participant in the Institute and expert in DEFA children’s films—to introduce and discuss the DEFA film Turlis Abenteuer, which was dubbed and successfully marketed as Pinocchio in the U.S. during the 1970s.

The academic and networking discussions that took place during the 2013 Summer Film Institute have already begun to bear fruit: