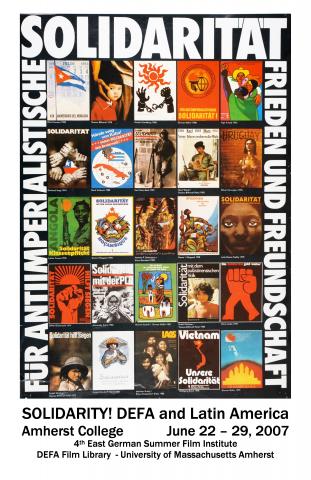 The Cuba-Film Festival and East German Film Series, as well as the Summer Film Institute on SOLIDARITY! DEFA and Latin America were programs of the DEFA Film Library at the University of Massachusetts Amherst. These programs were made possible with the help of the DEFA Foundation, PROGRESS Film-Verleih, the Max Kade Foundation, the German Academic Exchange Service (DAAD), the Department of German Studies at Amherst College, the Amherst Cinema Arts Center, the American Friends Service Committee of Western Massachusetts, and German and Scandinavian Studies & Languages, Literatures and Cultures at UMass Amherst.

The fourth biennial East German Summer Film Institute on the topic of Solidarity! DEFA and Latin America was held on June 22 – 29, 2007. The Institute brought together 25 scholars for a week of discussion on film, the International Solidarity Movement and changing Cold War relations between the East Bloc and Latin America.  Specialists in film studies, German studies, Latin American studies and other disciplines explored representations of international solidarity in feature and documentary films and to what extent these countered preconceived notions of race and culture, in an effort to understand cinematic collaborations between the hemispheres.

The Institute opened with a weekend Cuba Film Festival, from Friday, June 22 to Sunday, June 24. The Festival featured five prize-winning, lesser-known films by three of Cuba’s most renowned directors: Tomás G. Alea, Julio García Espinosa and Humberto Solás. These five titles had just been released on DVD by the DEFA Film Library and First Run Features. They were complemented by a special 35mm screening of the renowned Kalatozov film, I Am Cuba, at the Amherst Cinema on Sunday afternoon and a 2005 Brazilian documentary on the making of this Soviet/Cuban classic.

During the Institute itself, from Monday, June 25 to Thursday, June 29, a series of East German films was screened as well. Altogether, screenings included over 20 documentary and feature films stemming from Europe and Latin America during the height of the Cold War, most of which that have never before been shown in the US. The series focused on representations of Latin America in East German documentary and feature films, two of which were the result of collaborations with Cuban filmmakers. Feature film highlights included: Joris Ivens’ 1954 Song of the Rivers, the classic expression of the International Solidarity Movement on film; Rainer Simon’s 1989 The Ascent of the Chimborazo, a film on the 1803 expedition of Alexander von Humboldt up what was thought to be the highest mountain in the world, Ecuador’s Chimborazo; and Lothar Warneke’s Blond Tango (1985).