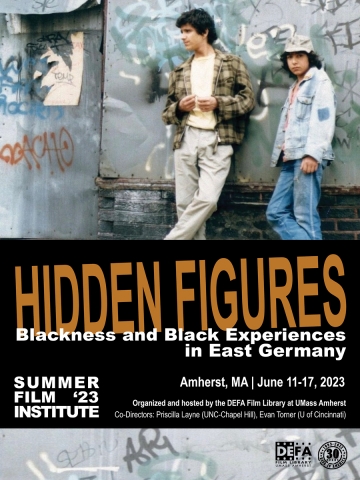 Co-directed by Priscilla Layne (UNC-Chapel Hill) and Evan Torner (Univ. of Cincinnati), this year’s weeklong Institute mobilizes Black film theory to explore filmic representations of Blackness, as well as lived experiences of BIPoC in former East Germany. Inspired by questions raised at our Summer Film Institutes since 2007 and at Black German Heritage and Research Association conferences since 2011, the film screenings and collaborative workshops will directly address (East) German notions of civil rights, equity, inclusion and difference—both under and after the end of state socialism. Like prior Summer Film Institutes, the accompanying Film Festival will be open to the general public and take place at local venues, including Amherst Cinema. The program will mix rarely shown films with films already available from the DEFA Film Library, all with English subtitles.

This interdisciplinary, residential seminar is intended for researchers, educators and doctoral students interested in race and representation during the Cold War; media studies; Blackness; and transnational exchanges between Europe, Africa and the Americas. A keynote by Katharina Warda, independent scholar and creator of the Dunkeldeutschland (Dark Germany) project, will open the Institute on Sunday, June 11. The week will then alternate between workshops, discussions and film screenings, with participants navigating the material alongside the facilitators. Participants will end by forming interest groups to conduct further research and plan conference panels and publications on institute topics.

The Institute will raise new questions by exploring the inherent tension between media portrayals and the actual experiences of Black Germans, Black Americans and African students and contract workers in East Germany (the GDR). Topics of interest include:

Priscilla Layne is an Associate Professor of German at University of North Carolina Chapel Hill. Her research focuses on postcolonial studies, gender studies and critical race theory to address topics like representations of Blackness in literature and film, rebellion, and the concept of the Other in science fiction/fantasy. She is the author of White Rebels in Black: German Appropriation of Black Popular Culture (University of Michigan Press, 2018). In addition to her work on representations of Blackness in German culture, she has also published essays on Turkish German culture, translation, punk and film. She has recently co-edited the volume Minority Discourses in Germany Since 1990 (Berghahn Books, 2022) and is currently working on her forthcoming book, Out of this World: Afro-German Afrofuturism. After serving as a Vice President from 2021 to 2021, Layne is now the President of the American Association of Teachers of German through 2023.

Evan Torner is an Associate Professor of German Studies and Film/Media Studies and director of the Game Lab at the University of Cincinnati. He has published several articles on East Germany, critical race theory, DEFA Indianerfilme, science-fiction, transnational genre cinema and game studies. His co-edited volume Immersive Gameplay: Essays on Role-Playing and Participatory Media was published in 2012. His major projects underway include the Handbook of East German Cinema: The DEFA Legacy, co-edited with Henning Wrage, and a monograph entitled A Century and Beyond: Critical Readings of German Science-Fiction Cinema.

The Summer Film Institute is perfect for academics at all levels and in a range of disciplines, as well as for other professionals, such as curators, librarians, high-school teachers, etc. Institute tuition is: $850 for permanently-employed applicants; $600 for non-TT faculty and non-renewably-employed applicants; and $350 for adjuncts and doctoral students. Tuition includes a dorm room, linens, lunches and two dinner-time receptions. A limited amount of financial assistance may be available; if interested, please include the extent of your need in your application letter.

Please submit a 2-3 page letter of application and your CV or résumé (no more than 5 pages). Doctoral students should also submit the name, title, phone number and email address of one reference. Letters of application should address:

Please submit your application by February 10, 2023 to our Institute Coordinator, Evgeniia Trufanova. As additional information becomes available, we will post it on our website. Evgeniia can also help answer any questions you might have.

Successful applicants will be notified of their selection by Friday, February 28; a commitment and $150 deposit will be due by noon on Friday, March 10.