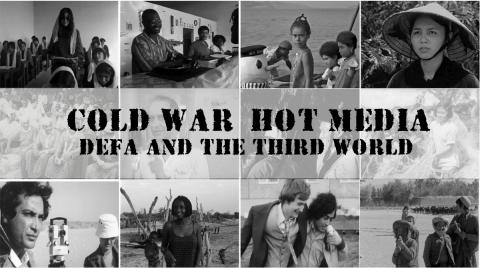 DEFA and the Third World

Thirty-eight scholars from seven countries and multiple disciplines attended the sixth biennial summer Film Institute, which took place from July 17-24, 2011. The week-long workshop offered a comparative look at the international and intercultural relations between East Germany and the Third World, particularly in the domain of filmmaking. Building on prior Summer Film Institutes – especially the 2007 Solidarity! DEFA and Latin America – this year's program extended the exploration of East German filmmaking in relation to the non-European world.

The international solidarity movement, which incorporated the work of filmmakers on many different levels, provides an ideal research topic for melding questions of globalization, film and the Cold War. In particular, the 2011 Institute addressed the cinematic connections between the GDR and Asia, the Middle East and Africa in relation to topics like colonialism, race and resistance; Cold War and the atomic threat; internationalism, technology and progress; culture and the arts; and travel and the exotic. The accompanying film series included a diverse array of feature and documentary films, newsreels, children’s and youth films, and films made for East Germany’s Foreign Ministry, allowing us to exhibit the widest possible range of materials from GDR history while also highlighting recurring themes.

This Summer Film Institute was part of an eighteen-month coordinated series of scholarly events exploring international aspects of filmmaking at the East German DEFA studios which was developed by the Media Studies Department at the Academy for Film and Television in Potsdam (HFF) and the DEFA Film Library at the University of Massachusetts Amherst (UMass). This collaborative project also provided the impetus for our book series on Film and the Global Cold War.