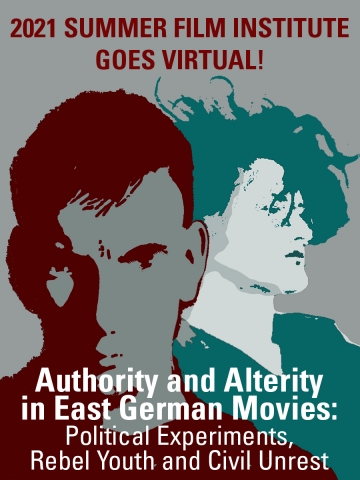 The weeklong virtual Institute and 3-week virtual film series explored representations of political experiments, "whistleblowers," youth rebellion and state authority in East German cinema. Discussions among 40 participants worldwide looked at the complex interplay of these in a historical context marked by political changes in a state that attempted to both undermine and re-appropriate reform impulses. Films, readings and virtual discussions helped participants parse the differences between dissent and alterity as socio-political manifestations, and how the example of the GDR can function as a springboard for discussions of artistic and personal responses to other political systems, past and present.

The Institute will take place virtually and in English. The format will include:

In the tradition of prior Summer Film Institutes, the accompanying Alterity and Authority film festival was open to the general public as well as Institute participants. Unlike prior years, it was held virtually, and the films were available to stream for a full three weeks, June 13-27. The festival included a mix of films already available from the DEFA Film Library and hitherto un-subtitled or -released titles.

The Institute was co-directed by Mariana Ivanova and Seth Howes.