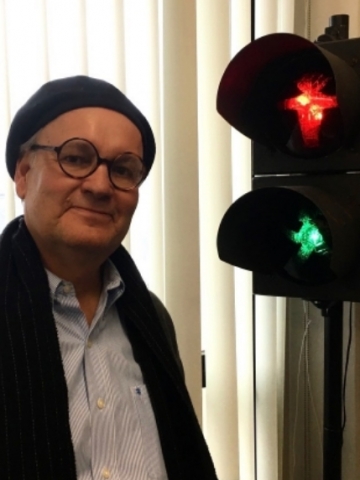 In February 2019, Founding Director Barton Byg officially established the DEFA Film Library Endowment. He started the endowment fund using his personal funds, as a means to support and enhance the mission and activities of the DEFA Film Library at UMass Amherst. In March 2019, he shared some of his thoughts on this important step.

How did you come up with the idea of establishing an endowed fund for the DEFA Film Library?

Setting up an endowment now made sense for me, personally, with my own retirement and estate planning. With certain limits, the University of Massachusetts generously matches such donations by its current and retired faculty and staff. The 25th anniversary of the DEFA Film Library and the search for a new Academic Director are also milestones that I wanted to observe with the creation of this new fund.

Why does the DEFA Film Library need an endowment?

Endowments are ever more important in public higher education since state funding and other sources support only a portion of what colleges and universities do. The DEFA Film Library is unusual in this regard, too, since it is in a sense an international institution: it has partners and constituencies around the world, not just in the Commonwealth of Massachusetts; and although its focus is education and academic research, it also addresses many other audiences. This endowment looks toward enhancing the long-term significance of the DEFA Film Library's collections and activities, as it will provide financial support—in the form of interest payments from the UMass Foundation—in perpetuity.

What kinds of things could the fund be used for in the future?

Revenue generated from the endowment could support a range of DEFA Film Library activities for which funding is currently limited. I'm particularly grateful, for example, to Hiltrud and Sky for creating the Founder's Fund in celebration of my retirement; this pilot project will help cover the expenses of student researchers who come to work on short-term projects at the DEFA Film Library.

Can anyone make a contribution to the endowment?

Anyone in a position to do—whether within or outside of UMass—so is encouraged to donate!