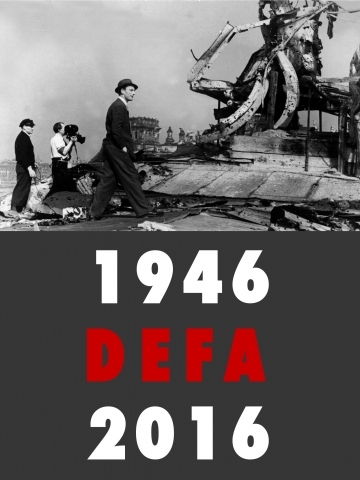 YOU BUY, WE GIVE!

The holiday season is around the corner, and many of us are lured away from thoughts about quality time with family and friends by a season of sales. Retailers offer huge discounts, and our email accounts are flooded with deals and promotions.

The DEFA Film Library is extremely pleased to announce that Dr. Victoria Rizo Lenshyn will take up the reins as our new Associate Director on December 18, 2022.

We deeply mourn the loss of Ralf Schenk

The DEFA Film Library team is in mourning the loss of its long-time friend, advisor, supporter and collaborator, Ralf Schenk who passed away on August 17, 2022 at the age of 66, after a brief but grievous illness.

Ralf’s passion for the DEFA films crossed borders and he inspired audiences, researchers and film curators outside Germany. His outstanding film knowledge helped show that DEFA made important contributions to international film history in a wider historical context.

We are pleased to welcome Black German director Branwen Okpako as our special guest at the 2022 German Studies Association conference in Houston, TX. There will be two possibilities to meet her.

ARTS NIGHT: The Visible Voice: The Films of Branwen Okpako

Please join us in saying farewell and thank you to our Executive Director, Dr. Skyler J. Arndt-Briggs. With outstanding organizational skills and acumen, Sky has served the DEFA Film Library (DFL) in different capacities since 1998.

Part of the leadership team of the DEFA Film Library (DFL), the Associate Directorship is an alt-ac position that oversees operational, financial and compliance matters, while also contributing to DFL’s long-term academic and programming goals.

Join us for DEFA LIVE 2 with Alexander Donev, Bulgarian film scholar and publicist, on June 10th at 1 pm (ET)!

Alexander Donev (Research Fellow at the Institute of Art Studies at the Bulgarian Academy of Sciences and Professor at the National Academy for Theater and Film Arts in Sofia, Bulgaria) will go live with us to talk about THE FILMS AND LIFE OF SLATAN DUDOW: A NEW BIOGRAPHY IN THE MAKING. Our Academic Director Mariana Ivanova will interview him and translate live from Bulgarian into English.

From June 13 to July 22 the DEFA Film Library will present a Summer Gallery on @defafilmlibraryamherst. This third virtual exhibit on Instagram will take a look at THE MAKING OF Bernd Sahling’s Film It’ll Be OK (1987-90), which documents the unique perspective of a punk who experiences two political systems in East and West Germany.

Please join the DEFA Film Library for the first chat in its new Instagram series, DEFA LIVE, on @defafilmlibraryamherst!

Monograph on Coming Out

In the book, Frackman examines the creation, context and the national and international significance of the first and only East German feature film about homosexuality. The volume contains 35 color illustrations and is available in both paperback and Open Access formats.

The festival started on Feb. 12 and our documentary "PAUL ROBESON: I’M A NEGRO, I'M AN AMERICAN” will close the festival on April 9—Paul Robeson’s birthday—with a hybrid (live and virtual) screening at Coolidge Corner Theatre in Brookline, MA. The screening honors Paul Robeson (1898-1976) and 200 years of his Quaker Ancestors: the Bustill-Mapps-Douglass Family of Philadelphia.

THE VALOR OF THE MISFIT

The Films of Branwen Okpako

We invite contributions for a series of panels on Branwen Okpako’s films for the 2022 GSA conference, Sept 15-18. Co-sponsored by the Black German Heritage & Research Association (BGHRA) and the DEFA Film Library, these panels seek to explore the range of stories and rich imagery in the films of this groundbreaking director.

Alexander von Humboldt in the Americas

In celebration of the 75th anniversary of the founding of the DEFA Studios in 2021, Kanopy launched the DEFA Essential Collection, featuring 25 newly-restored classics. Take advantage of their special offer starting August 30!

Deadline: August 15, 2023.  This annual prize is awarded for the best graduate student essay on East German cinema, along with a cash award of $500 from the Founder’s Fund for Student Researchers.

On May 16, 1946 the founding of the DEFA Studio in the Soviet Occupation Zone got official approval. In 2021, we celebrate the 75th anniversary of this occasion with a wide range of new programs and resources!

A Film+Talk event March 22-25 that looks at right-wing tendencies and trends in (East) Germany, then and now. REGISTER NOW!

The fourth in our new line of Teaching Guides to help teachers incorporate selected DEFA films into their classes! Our Teaching Guide for The Architects was developed by Carol Anne Costabile-Heming (Univ. of North Texas) and Juliane Schicker (Carleton College).

Welcome to FILMBOX, our free Digital Teaching Archive on Vimeo that is perfect for teachers, students and programmers!

Black Lives in Germany
Audre Lorde, May Ayim and the Black German Movement

Event I - October 22, 2020. Audre Lorde, May Ayim and the Black German Movement. A webinar discussion with director Dagmar Schultz and author Ika Hügel-Marshall. Moderated by Sara Lennox and hosted by curator Kevina King (both UMass Amherst).

2020 marks the 250th anniversary of the birth of the great German composer Ludwig van Beethoven. An untiring compositional innovator, Beethoven was a crucial figure in the transition from the classical to the romantic era in classical music. Afflicted with increasing deafness as of his early 30s, he was also a difficult person and suffered personal and social hardships.

In September 2019, German director and media artist Lutz Dammbeck will be our artist-in-residence guest and tour the USA with 18 of his documentaries and animation films, which we will make available for rental and educational streaming. Art & Power: Lutz Dammbeck is part of the Deutschlandjahr USA program.

We are pleased to announce the publication of the first volume of our new book series on Film and the Global Cold War!

The first major solo exhibition in the U.S. by German graphic artist Anke Feuchtenberger. Curated by UMass MFA student Bibiana Medkova, selected works by Feuchtenberger was on display at the Olver Design Building at UMass Amherst from June 26 through July 13, 2018.

We’d like to celebrate our 25th anniversary with you! PLEASE JOIN US! The first 25 people to contact us about screening one of our films at their cinema, cultural institution, university or college in 2018 will get 25% off our regular screening fee!

In the GDR social satire When You're Older, Dear Adam, a boy finds a flashlight that makes people float when they lie. Goethe Zentrum Atlanta hosted this DVD premiere during the 2016 SCMS conference.

Screenwriter and novelist Angel Wagenstein is the link between two films to be screened by the Massachusetts Multicultural Film Festival, the DEFA Film Library and Amherst Cinema, April 11-12, 2018.

As efforts to restore classic DEFA films are in full swing at the DEFA Foundation in Berlin, our collection of restored titles on DCP is keeping up with the newest movie theater technology!

From April 5-16, 2016, the Museum of Modern Art in NYC screened films released in 1966 in both East and West Germany. Four DEFA films were part of this  series that compared different cinematic responses to national and international events and topics.

On May 17, 1946, the Soviet Military Administration in Germany granted a license to the DEFA (Deutsche Film-AG) Studio for the production of films. Only five months later the first DEFA film, The Murderers Are among Us (dir. Wolfgang Staudte), premiered in Berlin and won international recognition—the first German film made after WWII.

On Dec. 13, 2015, director Gerd Kroske presented the US premiere of his film Drawing a Line at Amherst Cinema.

The long-awaited restoration of Heiner Carow’s The Russians Are Coming (1968/87) was screened as part of the Musuem of Modern Art festival To Save and Project on November 3 and 7, 2016.