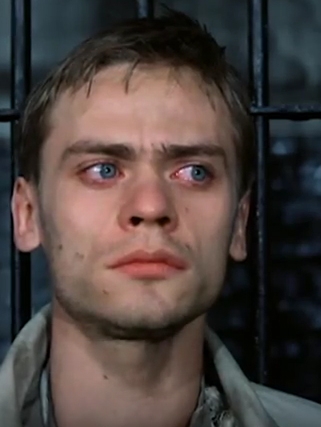 Sylvester Groth was born in Jerichow, East Germany, on March 31, 1958. He studied acting and singing at the Staatliche Schauspielschule in Berlin from 1977 to 1980. After his graduation, theater director Christoph Schroth engaged him for his ensemble at the Staatstheater Schwerin. Since then, Groth has performed at many prestigious theaters, including: the Deutsches Theater, Volksbühne and Schaubühne in Berlin; the Kammerspiele and Residenztheater in Munich; the Schauspielhaus Zurich; the Schauspielhaus Dresden; the Burgtheater in Vienna; and the Deutsches Schauspielhaus Hamburg. He has worked with the most prominent German theater directors, such as Peter Zadek, Christoph Schroth, Frank Castorf, Horst Schönemann and Piet Drescher, and with the American experimental theater director Robert Wilson.

At the beginning of the 1980s, director Frank Beyer cast the highly talented Groth, who had played only a few supporting roles in films, to play the demanding role of Mark Niebuhr, the protagonist in his DEFA film, Der Aufenthalt. His outstanding performance as a young German POW who is wrongly accused of a murder resulted in an international breakthrough. His sensitive performance also drew the attention of western theater directors. In 1984, the Salzburg Festival invited him to play the Young Templar in Lessing’s Nathan the Wise (dir. Johannes Schaaf). After a West German theater engagement the following year, Groth did not return to East Germany. One of Groth’s first film roles in his new theater and film career in West Germany was in Johannes Schaaf’s successful children’s book adaptation, Momo, in which he shared the screen with Mario Adorf and Armin Mueller-Stahl.

Groth has played in countless cinema and television productions, and film critics have praised his versatility as a character actor. For example, he has played: the author Clemens Brentano in Requiem für eine romantische Frau; a snobbish film director in Andrea Dresen’s Whisky mit Wodka; the theater director Boleslaw Barlog in Hilde, Kai Wessel’s biopic about Hildegard Knef; and the prosecutor in the US-German coproduction The Reader, alongside Kate Winslet, Ralph Fiennes, and Bruno Ganz.

Groth’s performance in Dani Levy’s comedy Mein Führer, as the Nazi Minister of Propaganda Joseph Goebbels, surprised critics and audience alike, and he was nominated for the German Film Award for Best Supporting Actor. A year later, he played the same character in Quentin Tarantino’s Inglourious Basterds, which was nominated for several Oscars and won the 2010 Screen Actors Guild Award for an Outstanding Cast Performance.

Beside his intense acting schedule, Groth has a successful career in audio-play and -book voicing. He has been the reader for many bestsellers, including Hermann Hesse’s Steppenwolf (2014), Carlon Ruiz Zafón’s The Shadow of the Wind (2009), Karl May’s Orient Cycle (2009) and the recording of Fyodor M. Dostoyevsky’s Crime and Punishment (2017), which is over eight hours long.

Most recently, Groth has worked on two film productions set in East Germany. He plays the Stasi boss in the Cold War espionage series Deutschland 83, the first German-language television series to air on a US network, it won the International Emmy Award for Best Drama Series. He also plays a famous East German historian in In Zeiten des abnehmenden Lichts, a bittersweet, multi-generational family drama that premiered at the 2017 Berlin International Film Festival.