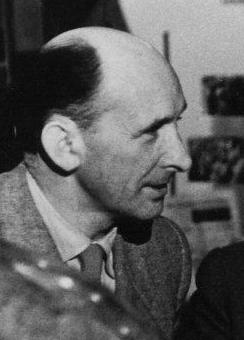 Joop Huisken was born in Amsterdam on April 30, 1901. In 1926, he started working for the Amsterdam office of the CAPI company, whose director was the Dutch filmmaker Joris Ivens. As of the late 1920s, Huisken was involved, in different capacities, in Ivens’s documentary productions, including Regen (Rain, 1929) and a film for the Dutch Construction Workers’ Union, Nieuwe gronden (New Earth, 1933).

In the late 1920s, Huisken was active in the Friends of the Soviet Union organization, the Association for Workers’ Photography, and distributing Soviet films. Huisken, a self-taught cameraman, became more and more interested in making his own films. When he traveled to the Soviet Union at the beginning of the 1930s, he documented his impressions in Arbeitersdelegatie film.

When German troops invaded the Netherlands in 1940, Huisken was sent into forced labor in Germany. Because of his past film experience, he was employed as a special effects technician and later as a camera assistant at the UFA Studios.After WWII, he decided to stay in Germany and joined the newly-founded DEFA Studio for Weekly Newsreels and Documentaries in 1946. He worked as a cameraman for director Kurt Maetzig’s newsreel productions and his documentary Immer bereit.  His own films documented reconstruction in the Soviet Occupied Zone (Potsdam baut auf) and political and economic developments in eastern Germany, including land reform (Junkerland in Bauernhand) and the first two-year plan (Stahl).

Huisken also collaborated with Joris Ivens—who had joined the East German DEFA Studio in 1951—on various films, including Freundschaft siegt (as co-director), about the 3rd World Festival of Youth and Students in Berlin, and the enormously ambitious projects Lied der Ströme (as the director of the German part) and Die Windrose (as a cameraman).

Joop Huisken’s international co-production China - Land zwischen gestern und morgen (GDR/France) premiered in East Germany in 1956.  Huisken and Robert Ménégoz—who had already worked together on Lied der Ströme and Die Windrose—both worked as directors, scriptwriters, and cameramen on the film and received the Grand Prize at the International Montevideo Film Festival in 1958. This full-length documentary intertwines three portraits with current developments in China. In 1958, a French version of the documentary under the title Derrière la grande Muraille (Behind the Great Wall)—with commentary written by Simone de Beauvoir—was released.

Despite his work on such prestigious productions, Huisken also had to deal with censorship issues. His film Dass ein gutes Deutschland blühe, celebrating the tenth anniversary of the GDR, was rejected by officials because of the “lack of a political concept” and was only released in a re-edited version. Huisken, who always supported the younger generation of filmmakers, was the mentor of director Jürgen Böttcher and cameraman Christian Lehmann. In 1961, Huisken also produced their short Drei von vielen, which was banned because of the presentation of workers.

As of 1958, Huisken took on different responsibilities at the Academy for Film and Television in Potsdam-Babelsberg. In the 1960s and ‘70s, he worked mainly on films about art and artists, including the painter and graphic artist Franz Masereel and the writers Gerhard Hauptmann and Arnold Zweig. Joop Huisken died in Berlin on April 1, 1979.