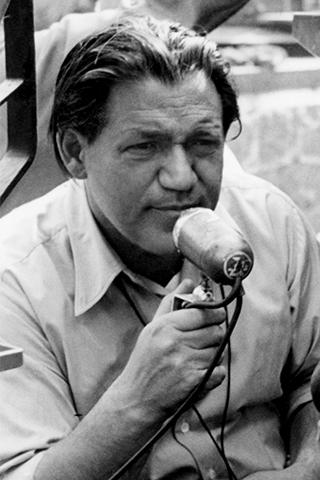 Slatan Dudow was born in Tsaribrod, Bulgaria, on January 30, 1903. Influenced by revolutionary ideas, Dudow moved to Berlin at nineteen in 1922. He abandoned his earlier plan to study architecture, and instead studied theater with Max Herrmann from 1925 to 1926. Dudow was also fascinated with film and became a film reviewer for a Bulgarian newspaper. He was on the set for the filming of Fritz Lang’s Metropolis. Working for the International Workers’ Relief, he supported the AgitProp movement and, from 1927 to 1928, he was a chorus member in Erwin Piscator’s Theater Collective in Berlin.

A trip to Moscow in 1929, where Dudow learned more about Vladimir Mayakovsky and saw films by Sergei Eisenstein, Vsevolod Podovkin and others, proved decisive for his career. Upon his return from Moscow, he directed the Bertolt Brecht/Hanns Eisler theater production of The Measures Taken, at the same time as he began his film career. He was commissioned to produce the short documentary Zeitprobleme. Wie der Arbeiter wohnt as part of a series on current issues. Kuhle Wampe, oder Wem gehört die Welt?, released in 1932, was his first feature film; for it he brought together an exceptionally renowned set of left-wing artists, including: co-author Bertolt Brecht, cameraman Günther Krampf (Nosferatu, 1921), composer Hanns Eisler, noted workers’ movement balladeer Ernst Busch and actress Hertha Thiele (Mädchen in Uniform, 1931).

In 1933, Dudow was arrested and interrogated by the Nazis. Once freed, he worked illegally on his film Seifenblasen until he had to go underground; this film was not finished until he was in exile in France. While in France he worked on a satire about fascism, entitled The Hand that Would Not Salute, but could not find a producer. Dudow also directed eight scenes of Brecht’s Private Life of the Master Race, which premiered in Paris in 1938 under the title 99%, starring Helene Weigel and Ernst Busch. Because of his political work, Dudow was expelled from France in 1940 and fled to Switzerland, where he wrote comedies for theater.

In 1946, Dudow returned to Berlin, where he published and staged three comedies that he had written in the early 1940s. Henschel Verlag published them under the pseudonym Stefan Brodwin. At the newly founded DEFA Film Studio in Potsdam-Babelsberg, Dudow then worked on a film adaptation of one of these plays, Der Weltuntergang (The End of the World). After this project failed, he worked on his first postwar feature film production, Unser täglich Brot, which premiered in 1949. In this film, Dudow continued the tradition of German proletarian film established during the Weimar Republic. In almost documentary fashion, the film gives convincing and detailed descriptions of socialist everyday life in the midst of Berlin’s ruins. It became known as a premiere socialist realist film of its day, and the score by acclaimed composer Hanns Eisler was a centerpiece of contemporary reviews.

In his films Familie Benthin, co-directed with Kurt Maetzig, and Frauenschicksale, Dudow tells stories set in both parts of Germany in the 1950s. Then, with Stärker als die Nacht, Dudow returned to the Nazi period, exploring the political life of a couple over a period of seven years. This film received international acclaim and was awarded the Journalists’ Award for Best Film at the 1955 Locarno Film Festival. In the late 1950s, Dudow directed two films. Der Hauptmann von Köln is a dark satire on militaristic tendencies in West Germany, initially written for theater. In contrast, Verwirrung der Liebe is a light and fanciful comedy about a partner swap between two young couples, featuring two young actresses who would become East German stars: Annekathrin Bürger and Angelica Domröse. Although this film caused controversy among officials, who saw it as a threat to socialist morality, they allowed it to be screened at international film festivals.

Slatan Dudow died in a car crash near Berlin on July 12, 1963 before he could finish his last film, Christine, a look into the life of a young woman searching for love and success as a female farmer. A partial reconstruction of this film, based on a very rough cut, was undertaken in the 1970s and screened in 1974; the DEFA Foundation plans a digital reconstruction of the film in 2020. Although the directorial oeuvre of Slatan Dudow, who also wrote scripts for many of his films, is not large, he was a crucial figure in (East) German and international film history.