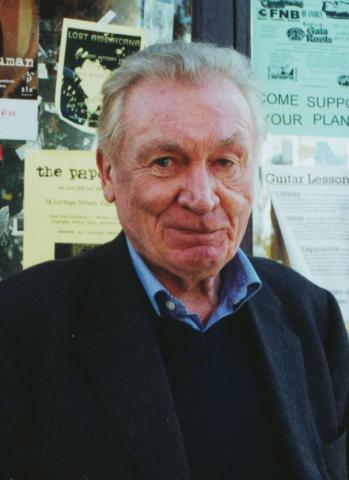 Frank Beyer was born in Nobitz, Germany, on May 26, 1932. After graduating from high school in 1950, he trained to become film projectionist, worked as district SED Party secretary for the local cultural association in Altenburg and wrote theater reviews for the local newspaper. Beyer also worked as an assistant director and dramaturg at theaters in Crimmitschau and Glauchau in the late 1940s and early 1950s.

In 1952, Beyer began studies in drama in Berlin, before transferring to the famed Prague Film School (FAMU), where he studied directing alongside Miloš Forman and other promising directors of the Czech New Wave. After completing his FAMU thesis film, Zwei Mütter, he joined the DEFA Studios as a freelance assistant director in 1957.

Beyer made his directorial debut with short films for the satirical series Stacheltier in 1957. Through the early 1960s, he directed very successful DEFA feature films, including three films in the antifascist genre: Fünf Patronenhülsen, about an international group of soldiers in the Spanish Civil War; Königskinder, a love story set during WWII; and Nackt unter Wölfen, set in the Buchenwald concentration camp. With his post-WWII comedy Karbid und Sauerampfer, Beyer also established himself as a master of comedy. In 1966, however, Spur der Steine—Beyer’s film about a rebellious construction brigade and one of DEFA’s most lively and convincing current affairs films—was banned, and Beyer was expelled from the DEFA Studios.

In the years that followed, Beyer directed stage productions for the Staatstheater Dresden and the Maxim Gorki Theater in Berlin. He also began a prolific career directing movies for East German television, including the four-part TV series Die sieben Affären der Doña Juanita, about a young architect who is also a single mother.

Beyer worked with German-Jewish author Jurek Becker on the script for Jakob der Lügner for almost ten years. When Beyer was banned from working as a film director in the 1960s, Becker re-wrote and published the script as a novel in 1969. When Beyer was then allowed to return to the DEFA Studios in 1974, he directed Jakob der Lügner on commission for GDR television. In 1976, this film became the only East German film ever nominated for an Academy Award for Best Foreign Film.

Also in 1976, Beyer joined other East German intellectuals and artists in protesting the expatriation of GDR singer-songwriter Wolf Biermann. When its leading actor Manfred Krug, who had also signed the petition, left the GDR for West Germany, Beyer’s Das Versteck—about a divorced couple that tries to get back together—was restricted from a wide distribution. Beyer continued working for television, but his 1978 TV film Geschlossene Gesellschaft, which is about a marital crisis and features the stars Jutta Hoffmann and Armin Mueller-Stahl, created a huge stir. Officials criticized its negative portrayal of relationships in socialist society and withdrew the film after its first broadcast. Once again banned from filming in the GDR, Beyer managed to get a special work permit for West Germany. There he directed two films for public television: Der König und sein Narr, a historical story about the role of artists in dictatorships; and Die zweite Haut, about a married woman who is looking for a new identity. In both projects, Beyer teamed up with former East German artists who had moved to West Germany, including actors Angelica Domröse and Hilmar Thate and cameraman Günter Marcinkowsky.

After these two projects, Beyer returned to the DEFA Studios to direct several films, including the film adaption Der Aufenthalt, the story of a German POW, played by a young Sylvester Groth, wrongly accused of murder and imprisoned in Poland. Although the film was to screen at the 1983 Berlin International Film Festival, East German officials withdrew it after the Polish government declared the film would stir up anti-Polish sentiments. Nevertheless, Der Aufenthalt was one of East Germany’s official submissions for the Academy Awards.

Beyer, who was influenced by Eastern European film cultures, worked on two more films before the fall of the Wall: Bockshorn, a road movie for young people shot in the USA, Bulgaria and Cuba; and Der Bruch, a crime comedy set in post-war Berlin in the winter of 1946, with West German actors Götz George and Otto Sander in leading roles.

Among East German directors, Frank Beyer was unusually successful in remaining productive after German unification in 1990. In his 1995 television movie Wenn alle Deutschen schlafen, based on Jurek Becker’s personal memories and short story, he once again displayed his great talent for working with children actors. One of his most important later films, Nikolaikirche, based on the gripping novel by Erich Loest, tells the story of a family in the final years of the East German state. His 1998 film Abgehauen is based on the autobiography of the famous (East) German actor Manfred Krug, in which he explores his own experiences as a GDR artist after the Biermann affair. Beyer’s last project was a TV-film based on the novel Jahrestage (Anniversaries), by Uwe Johnson. Although Beyer had developed the project and already completed the pre-production work, the producers replaced him with director Margarethe von Trotta due to conflicts.

Frank Beyer was one of the most important German directors of the postwar period and made some of Germany’s most powerful and historically significant films. Throughout his career, Beyer collaborated with many artists on more than one film project: actors Manfred Krug, Armin Mueller-Stahl and Erwin Geschonneck; and authors and scriptwriters Wolfgang Kohlhaase, Jurek Becker and Ulrich Plenzdorf. Beyer worked with director of photography Günter Marczinkowsky on ten films.

In 2001, Beyer published his memoir Wenn der Wind sich dreht: Meine Filme, mein Leben [When the Wind Turns: My Films, My Life], which provides an in-depth view of his life and work. In fall 2002, he was an artist-in-residence at UMass Amherst and presented his work at twenty-eight North American universities, colleges and cultural institutions during a two-month tour organized by the DEFA Film Library.